Posted by golfkat on January 6, 2011
Posted in: Entertainment, Sports. 11 Comments

Much has been made of one of our local Giants’ baseball stars, Tim Lincecum, aka, “The Freak”.  In his case, his slight body and short stature belies his ability to throw a baseball almost 100 mph, and strike out batters almost twice his size.  Usually, the best pitchers are at least 6 feet tall, well muscled, and powerfully built.  So, this freak of nature is able to generate power and speed through a combination of his legs, body, and arm.  There is no sure way to predict who can throw a baseball fast and accurately based solely on body type.

Likewise, in other sports, like basketball, football, skiing, tennis, and golf, the typical body type athlete is not the only successful athlete.  Every sport has someone who is definitely a misfit, yet is able to not only play the sport well, but in some cases, excel to the point of reaching the pinnacle in their respective sport.

Dunking a basketball in the hoop is generally easy for taller players.  But I have seen countless guys about 5 feet, 6 inches tall, dunk the ball with ease.  Three that come to mind are Muggsy Bogues, 5 feet, 3 inches, a former NBA player, Gene Ransom, about 5 feet, 6 inches tall, who played at Cal in the 70s, and Nate Robinson of the Celtics, who is my height at 5 feet, 9 inches.  They are just blessed with lots of spring in their legs.

On the plus side of things, the large, round bodies like Gnarles Barkley are equally freaks.  At only about 6 feet 5 inches, at best, and perhaps 250 pounds, Gnarles pounded away on both ends of the floor against 7 footers, and behemoths over three hundred pounds.  In his case, he did it with pure fortitude, stubbornness, and knowledge.  Some guys were born to play basketball, even though he had the body of a tight end or linebacker in football.  As a commentator on TV, he is just terr-bull. 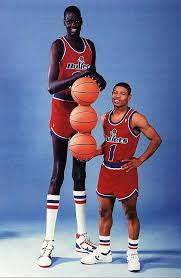 The real freak occurs on the other end of the basketball spectrum.  Wilt the Stilt Chamberlain stood 7 feet, 1 inch tall, and weight over 300 pounds.  Yet this gentle giant NEVER fouled out of a professional basketball game!  Add to that his nocturnally horizontal gymnastics, and he truly was a freak of nature.  Manute Bol was a strange fellow, thin as a stick, but 7 feet, 7 inches, one of the two tallest to play in the NBA.  He died recently, as expected of very tall humans.  He died at 47, Wilt at 52.  Bottom line, agility and coordination at these heights are rare indeed.

Football players are well known for speed, strength and girth.  But some players defy this stereotype, such as Maurice Jones-Drew of the Jacksonville Jaguars.  He is 5 feet, 7 inches tall, and weighs around 200 pounds.  He is a running back, whose typical size is about 6 feet tall, and a weight of about 220 pounds.  Yet he has succeeded, not only in his ability to be quick, but also to run inside the tackles where power is required.

When I was growing up, there was a quarterback named Eddie Lebaron, who was only 5 feet, 7 inches tall.  But his arm was like a bazooka, with great accuracy.  Most professional quarterbacks are Tom Brady size, about 6 feet, 4 inches, 225 pounds.  I doubt Lebaron would have succeeded today with the overall size of players in professional football now.  Take Lebaron’s arm, place it on a typical body for a quarterback, and the result would be an All Pro standout.

Even one of the greatest players of all time, local hero Joe Montana, was and still is a skinny, spindly legged guy, with an average body.  But he had confidence, and he was a winner in everything he did.  But perhaps his greatest gift was his calm demeanor.  It inspired confidence in his teammates, since they knew Joe would come through.  He did have a strong arm, and he was not built like a typical football player.  Everyone still wants a big quarterback, but Drew Brees, at barely 6 feet tall, won the Super Bowl last year.  Look at the failures of the big guys, like Ryan Leaf, Jim Druckenmiller, David Carr, Matt Leinert, and Jamarcus Russell.

Skiers seem to fit a real stereotype, in that too tall and too heavy just do not translate to enough agility to conquer the slopes.  The typical size, which is Jean Claude-Killy, is 5 feet, 10 inches tall, and a weight of 165 pounds.  Though he won all three alpine skiing events in the Olympics, most successful downhill skiers are taller and heavier.  The slalom and Giant slalom require more agility, less wind resistance, and lower center of gravity.

On the prettier side of things, Lindsey Vonn won an Olympic Gold Medal in the Downhill in Vancouver.  She stands a relatively tall 5 feet, 10 inches.  She seems to have more problems in the events that require quick turns, like the slalom.

But getting back to baseball, the truth is that nobody has figured out who can either best HIT or THROW the ball.  There is no single body type.  The great Jim Thorpe, perhaps one of the finest athletes in the world, failed at professional baseball because he could not hit a curce.  Ditto for Air Jordan.  His remarkable basketball skills could not help him field, throw, or hit.  For every chunky player, like John Kruk or the legendary Babe Ruth, who looked like Humpty Dumpty, there is a great human specimen like Albert Pujols, and Alex Rodriquez.  The most successful hitter (200 hits in each of the last TEN seasons) in the last several years is a slightly built speedster from Japan, named Ichiro Suziki, who stands 5 feet, 9 inches, and 124 pounds!

I once went to a sports medicine seminar, where they studied body types for various sports.  The easiest one to predict was a running back in football.  Best qualities were a low center of gravity, and slightly bowed legs.  The prototypes here are Jim Brown, the old Cleveland Browns great, and the infamous OJ Simpson, now in jail in Vegas. But a big body does not always translate to success.  Other factors, like intelligence, conditioning, agility, upper body strength, and leverage play an equally important part.  Lately, it seems the running backs are a little shorter, and closer to the ground, like Chris Johnson, and Frank Gore.

The ideal sprinter in track is the female body type.  Very little upper body movement is propelled by a lower body that generates it speed from the hips on down.  It is a distinctly different motion than the power running style of a male sprinter.  Evelyn Ashford was the first of this generation of runners. Now, all the great females run this way.

Tennis has produced players of all sizes and shapes.  On the women’s side, the power and athleticism of the Williams Sisters is hard to compete against.  But there is a new generation of tall Russian girls who move around the court like gazelles, and grunt like wart hogs.  Bottom line, the small athletic female will always be beaten by the bigger athletic female player.  Nobody can dispute the pure athleticism of Rafa Nadal, but now his body is starting to break down.  The prototype here is Roger Federer, lean, not over muscular, with low body fat.  He moves like a gazelle, and has strokes as smooth as silk.  The days of smaller, less athletic players like Jimmy Connors, and John McEnroe might be over.

Some of you may think that Dolly Parton and Sidra Hollins are freaks of nature.  I prefer to call them freaks of silicone or saline.  The Girls Gone Wild Show on TV seems to favor the natural versus the synthetic look.  More power to them.

Clark Kent was an unusual character, a mild mannered reporter by day at the Daily Planet.  He would often go missing during very important events and crises in and around Metropolis.  Word from his pal, Jimmy Olsen, was that he was really Superman.  But I think only Lois Lane would really know if he was super, man!

Our dog Buddy is a freak of nature, as well.  He can actually climb trees up to about 5 or 6 feet.  In fact, he is kind of a Clark Kent of dogs.  He is very mild mannered inside, but goes ballistic when he gets near garbage trucks, UPS trucks, golf carts, and wild animals.

Perhaps the all time best freak of nature is Santa Claus himself.  He is quite old, and has a huge belly.  He looks out of shape, and has eaten too many cookies over the centuries.  But this human specimen can not only shimmy down chimneys with a huge bag of gifts.  But he can also climb back up without crampons or ladders, back to his reindeer and sleigh.  He is truly a remarkable man.  Of course, honorable mention should go to the following:  Jack Frost, Mother Goose, Easter Bunny, Casper the Friendly Ghost, Spiderman, and Captain Kangaroo.

11 comments on “Freaks of Nature”