More Yo And Less Ma

Posted by golfkat on September 19, 2011
Posted in: Entertainment, Music. Leave a comment
I most recently heard fabulous world’s greatest cellist, Yo-Yo Ma in concert in Berkeley with his Silk Road Ensemble.  The music was rather eclectic, and did not feature Yo-Yo Ma as much as I would have liked.  This evening, he will perform with the San Francisco Symphony at Davies Hall.  The program will consist of the following:

Mr. Ma is a French born American cellist, virtuoso, orchestral composer, and winner of multiple Grammies and the Presidential Medal of Freedom in 2011.  He is without doubt, the most famous and well regarded cellist of our time.  He was born in Paris in 1955 to Chinese parents.  His mother was a singer, and his father a violinist and professor music.  He began performing for audiences at the age of 5.  He performed for Presidents Kennedy and Eisenhower at the age of 7!  And of course, he attended the Julliard School of Medicine, as did the famous robber barren, Cosmo Kramer.  He is a graduate of Harvard University. 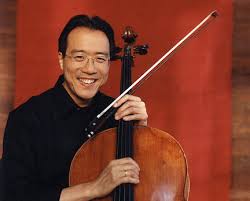 His list of accomplishments are too numerous to mention.  His discography is even more impressive.  This is a partial list, since they earned Grammy Awards.

This is the 100th Anniversary of the San Francisco Symphony this year. The SF Symphony has invited the big five of symphony orchestras to help celebrate.  These are the Boston Symphony, the Chicago Symphony, the Philadelphia Orchestra, the Cleveland Orchestra, and the New Yorn Philharmonic.  They will perform two concerts apiece throughout the season at Davies Symphony Hall.