Posted by golfkat on September 30, 2011
Posted in: Entertainment, Music. Leave a comment

Tonight, at UC’s Zellerbach Hall, will be another world-famous musician of our time.  One of the music greats of this era is Herbie Hancock.  He has made a name for himself in American music as a pianist, bandleader and composer.  He is credited with being one of the primary architects of the “post-bop” sound.  Perhaps even more interesting, he is one of the first jazz musicians to embrace music synthesizers and funk music.  Funk music is characterized by syncopated drum beats.

Hancock’s music has also been called melodic with many “cross over” songs.  His music uses funk and soul with a freer use of jazz based stylistics.  He has uniquely blended jazz, blues, and modern classical music in the Debussy and Ravel styles.  His best known works are “Cantaloupe Island”,  “Watermelon Man”, “Maiden Voyage”, “Chameleon”, and “Rocket.”  He won the 2008 Grammy Award for Album of the Year. only the second jazz album to win the award (after Getz/Gilberto in 1965). 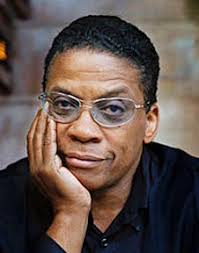 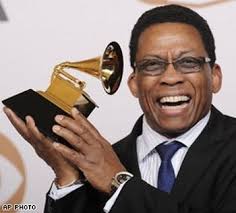 Among other awards, Hancock was named UNESCO Goodwill Ambassador for the promotion of Intercultural Dialogue.  He practices Buddhism from the Nichiren school of Mahayana Buddhism.

He was born in Chicago and began his musical education in classical music.  At age eleven, he played with the Chicago Symphony, Mozart’s Piano Concerto No. 5.  Through his teen years and beyond, he never had a jazz teacher.  He began working with jazz musicians when he attended Grinnell College.  During this period, he was influenced by Donald Byrd, Coleman Hawkins, Oliver Nelson, and Phil Woods.  He recorded his first solo album in 1962.  His “Takin’ Off” caught the eye and ear of Miles Davis.

So, in 1963, he joined Miles Davis’ “second great quintet”.  During this phase, Hancock found new ways to use common chords, while also employing and popularizing chords that had not been used in jazz previously.  This created unorthodox and sophisticated chord changes that were hardly discernible.  He also recorded dozens of albums in his own name, as well as a sideman for Grant Green, Bobby Hutcherson, Donald Byrd, and Freddie Hubbard, among others.

His most influential jazz LPs of the Sixties were Empyrean Isles (1964) and Maiden Voyage (1965).  Perhaps I was listening to his jazz when I reached UC Berkeley during the 1964 to 1965 time frame.  Later, he began incorporating rock and popular music into his recordings.  He also began doubling on the Fender Rhodes electric piano at the suggestion of Miles Davis himself.  After being dismissed from Davis’ band in 1968, he formed his own sextet, though he still appeared on Davis’ records over the years.

Hancock became fascinated with musical gadgets and toys in the 70s.  He composed the soundtrack for Bill Cosby’s Fat Albert and signed on with Warner Bros. Records.  He founded a sextet to encompass electronic music with Dr. Patrick Gleeson programming the synthesizers.  More albums were released using the Fender Rhodes piano, along with the ARP Odyssey, ARP 2600,  ARP Pro Soloist Synthesizer, a Mellotron, and the Moog Synthesizer III.

Hancock was involved in various bands, including his “V.S.O.P.” quintet, that included the Miles Davis quintet, except Davis.  In 1978, he recorded an album with Chick Corea, who had replaced him in the Davis band.  He albums reflected jazz-inflected disco and pop music during this period.  Into the 80s, he also wrote traditional jazz pieces.  In 1983, he won a Grammy for the instrumental single, “Rockit.”  He appeared onstage at the Grammy Awards with Stevie Wonder, Howard Jones, and Thomas Dolby.

Into the 90s, he recorded “A Tribute to Miles Davis”, released in 1994 and won a Grammy for best group album.  He continued to collaborate with other jazz musicians during the 90s.  Recently in 2005, he recorded duets with Carlos Santana, Paul Simon, John Mayer, Sting, Annie Lennox, and Christina Aguilera, among others.  He continues to perform and collaborate with famous singers and musicians.

He has won 14 Grammies, one Academy Award, 5 MTV Awards, and the 1997 Miles Davis Award.  Is this my first Herbie concert?  I honestly do not remember.  So many jazz greats appeared at the Concord Jazz Fest over the years, even when it was held in the park, rather than the Concord Pavilion.