It Never Rains in Seattle!

Posted by golfkat on October 10, 2011
Posted in: Food, Travel. Leave a comment

“It never rains in California…..” according to the Eagles.  It never rains, or hardly rains, when we visit Seattle.  It is easy to spot tourists in the rain.  We are the only one with umbrellas.  Seattleites rarely carry an umbrella, rather choose a stylish trench coat and rain fedora.  They seem to have the panache and style of old San Francisco.  On the other hand, the Bay Area has become sloppy sheik, to the point of losing its “style”.

I have several raincoats and even a couple of wool overcoats, from my days on the road.  And I am armed with my trusty Tumi bumbershoot, perhaps the best one ever made.  Having played golf in the rain in Scotland, I learned that the umbrella is called a “brolie”.  And perhaps the best make shift rain protection is the ten gallon plastic garbage bag.  I got caught in the rain at the US Tennis Open in Flushing Meadow many years back.  My cousin and I stole a couple of bags from a food booth.  We poked holes for head and arms, and slipped them on.  We stayed dry all the way to the train and taxi stand!

But rain hardly stops us from our normal activities here in Seattle.  Most venues that we enjoy are walking distance.  Anything further (or is it farther?) and we jump of the city bus, which is free in the downtown corridor.  But this is a great walking city, despite the obstacles of homeless, and pigeon poop.  One year, I got blasted by pigeon poop, to the point where I had to buy a cheap T-shirt, just to get back to the hotel!  And of course, when all else fails, and the rain goes postal, jump in an Orange Cab.

One of the best free venues here is the Seattle Public Library.  Again, overusing superlatives in Seattle, it is the most magnificent library in the universe.  Free newspapers and free internet are what attracts me, along with the dramatic design.  It was designed to resemble a stack of books.  It makes Harvard’s library look like a sand box.  And though the Library of Congress in Washington, DC is much larger, Seattle’s is simply real and spectacular, according to Sidra (Terri Hatcher on Seinfeld).
Shopping around town.  I saw that famous Penang born designer, Jimmy Choo, has a line of ridiculously priced men’s shoes at Nordies.  It looked to be in the $400-$500 range, with uninspired designs.  But soon a rather dichotomous dilemma appears.  Why do men’s shoe sales not provide the same bargains as women’s shoes?  The answer, according to my shoe girl experts:  Women have so many styles, men’s styles stay rather stagnant, and retailers can get away with it since men generally have fewer pairs of shoes!  Not good reasons in my way of thinking.
We began our Sunday morning with breakfast at Lola’s.  We saw our old friends, Vlek and Lori.  We met a new waitress, Lacey, who is getting her Master’s in Nursing.  She is from Hawaii, and has lived in California, and New Orleans, before ending up here.  She is a bright and beautiful young lady.
We had to get some exercise, so we walked across town to Uwajimaya in the International District.  It is down by Union Station, and the two sports stadiums.  Today will be a little crazy with a Seattle Seahawks game against the Atlanta Falcons.  Atlanta is led by former Cal Bear great, and All-Pro, Tony Gonzalez.  He also played basketball when he was at Cal.
We finally made it into the most famous noodle joint in Seattle, Samurai Noodle.  It is, contrary to public opinion, not owned by the Samurai School of Discount Travel.  But it does have the best ramen this side of Maui and Sam Sato’s.  Most of the time, with a line out the door, we decide to go elsewhere.  But today, on a Sunday, only four people were inside.  Of course, that meant that most of the tables were occupied.  The joint is about the size of our closet.  Another must stop on the gourmet’s gallop through Seattle.
For some reason, we see many large groups of tourists this weekend.  Even the old, faux original Starbucks in Pike Market had a line about fifty people long.  As you know, that is not the original Starbucks store.  But it is located in the same area.  Please don’t tell the tourists!
We even noticed that Jack’s Fish Spot has re-opened across from Pike Market.  Normally, we get a scallop and chips lunch there when we visit.  Of course, Jack was off in Hawaii or Timbuktu.  The slightly remodeled place was hopping, even for a Sunday.  I have no explanation for why all these places are so busy in the middle of the off-season for tourists.
No shoes yet, but I did buy a rather unique shirt from my friends at The Finerie.  Known locally by the fashionistas, Finerie touts many local designers in their store on First Avenue.  They also have many charity events throughout the year, produced by none other than Wendy Wood Productions.  And most fortunately, we count Wendy Wood, as well as Michael and Tanya as friends.  The best thing about their wares, nobody else will be wearing it!!!!!  And we have been invited to a special party on 11/11/11!
So, dinner at Cuoco was simple and delicious.  We started with a baby greens salad with nectarines, huckleberries, and candied pecans.  We opted to stay simple, and both had the agnolotti, a smallish sized ravioli about the size of a finger nail.  It was filled with a lamb, veal and rabbit combination, and lightly tossed in butter.  (Sorry about the rabbit, Donna).  We had a rather interesting fennel and preserved candied cherries as a vegetable side.  Outstanding. We topped it off with some pannna 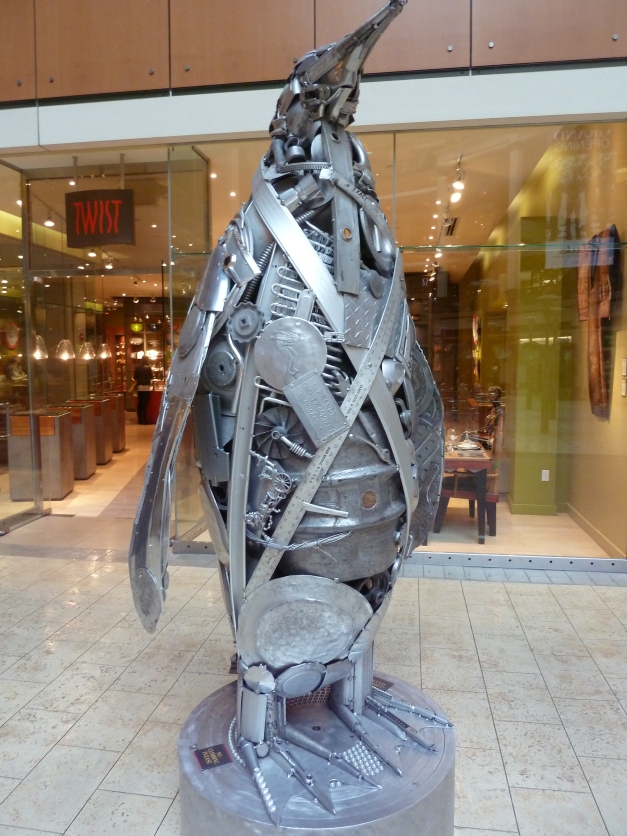 cotta and boysenberries and some rather strong decaf coffee.
We had to cab it there due to rain, but walked back in rather nice conditions.  Monday is another busy day.  Meeting friends for both breakfast, and later, a big celebratory dinner at Lola.  It cannot get much better than this!