Posted by golfkat on April 22, 2012
Posted in: Cultures, Travel. Leave a comment

Wright paid $3.50 an acre when he envisioned the desert as his winter home. His official residence and place of business were in Wisconsin. Because he felt so strongly about his connection with the desert, he continued to build and eventually live here full-time.

I am certain you can read all about him, his many wives, and offspring. His most famous living relative is a granddaughter, Anne Baxter, the actress. My focus is on the campus itself, and the School of Architecture. And no, George Costanza did not graduate from this esteemed school. 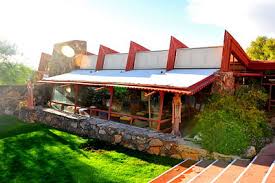 It is a fully accredited institution of higher learning, offering both a Bachelor and Master of Science degree. First year students are forced to live in make shift tents on the property behind the main campus. Our guide told us that a big problem, bigger than snakes, were the desert rats. The experience is meant to force the student to think about what could be done to improve their living arrangements.

Students could build a better home, so to speak, and often asked for donations from nearby builders and supplies. Labor, of course, was free, as in “do-it-yourself”. One enterprising student got a solar company to offer two solar panels. He had a single light from which to read upon completion. Sometimes, a student left their project incomplete, only to have another student come along and complete it!

Kitchen duty was another part of the curriculum, again designed to make the student think about their living space and what a kitchen should be. Peeling 400 pounds of onions, however, seems a little overboard. Students also had to arrange the dining tables and seating in the dining hall, again with a lesson in mind. If the tables and chairs were not placed for maximum efficiency and movement, the student would continue until he or she found a solution.

I think you get the idea by now. Every job or assignment, no matter how trivial, had a lesson. Students learned architecture through life lessons as well as book learning. After housekeeping duties were complete, a student might finally get to work in the drafting room.

Students must live on campus, for 50 weeks of every year. The tuition these days runs about $30,000 per year, but includes room and board. Eventually, the student earns dormitory privileges though their sleeping bags from their “tent days” are still used in the small, but efficient dorm. 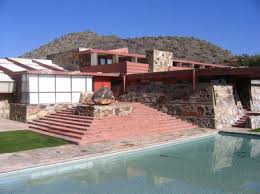 Students are told to bring two items to campus. The sleeping bag, of course, and a tuxedo. The tuxedo was for Saturday night “fun” night. They were not allowed to drive into Scottsdale and partake of the town’s nightlife. The students were invited for cocktails into the Wright’s living room, often with dignitaries present. One such person was Joseph Stalin’s daughter. Often times, Congressmen or local politicians, musicians, and lecturers were invited. After cocktails and dinner, a movie might be shown, or a live musical performance would take place. A large auditorium type amphitheater was built for this purpose.

The school can accommodate only 30 students, though currently only 22 are on campus. Scholarships are available after the first year on campus. Our guide and practicing architect said he was admitted after filling out a one page application and an interview with Mrs. Wright. Today’s student must submit some of their drawings and designs, as well as the usual admission garbage.

I did ask if Mr. Wright and Georgia O’Keefe were friends. Most definitely, to the point where they corresponded regularly. In fact, aside from his over 1100 architectural designs, over 550 were completed. This is an ungodly number for one man! He was also a prolific letter writer, and probably did not sleep more than a few hours a night, much like Thomas Edison. Busy man, as he also had six children by his first wife.

I could go on and on, as these stories are not found on their website or Wiki. But I think you get the idea. And hopefully, you have received flavor enough to drop in on your next trip to Scottsdale. It is certainly a stark contrast to the bleached blondes and plastic surgery that I have come to associate with modern-day Scottsdale.