Posted by golfkat on January 2, 2013
Posted in: Cultures, Travel. 32 Comments 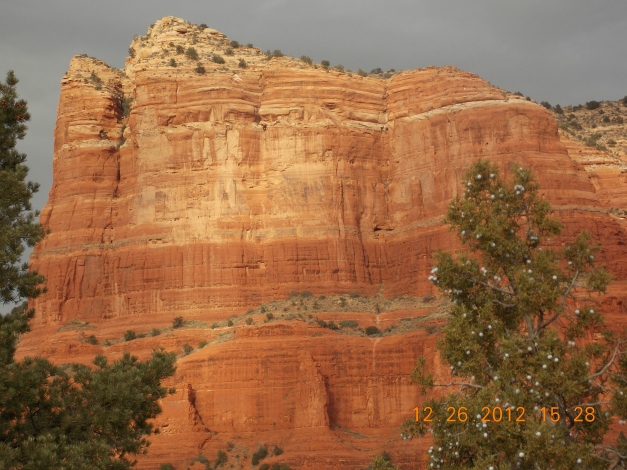 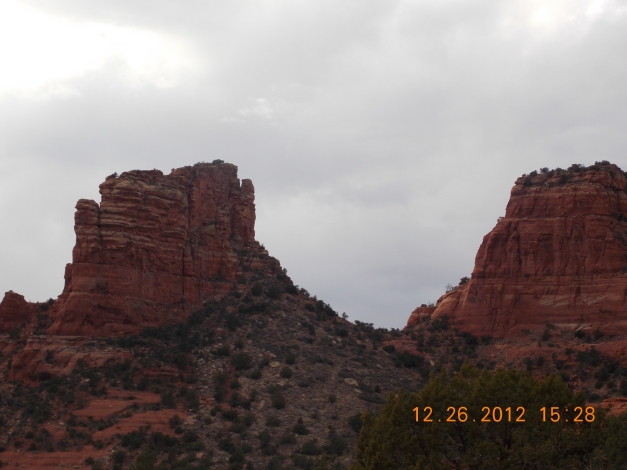 What is it about Sedona that keeps me coming back?
No, it’s not vortices. In Sedona the plural of vortex is usually vortexes. So what is a vortex, anyway? Well. you see them in everyday life. The turbulent flow of water makes vortexes. If you have ever seen a whirlpool in a river or watched water going down the drain in the bath tub and have witnessed the tornado like glassiness of spinning water, you have seen a vortex. A vortex is created from spiraling motion of air or liquid around a center of rotation. If you have ever witnessed a dust devil kick up in the desert, you have seen a vortex.
In Sedona vortexes are created, not by wind or water, but from spiraling spiritual energy. The vortexes of Sedona are named because they are believed to be spiritual locations where the energy is right to facilitate prayer, mediation and healing. Vortex sites are believed to be locations having energy flow that exists on multiple dimensions. The energy of the vortexes interacts with a person’s inner self. It is not easily explained. Obviously it must be experienced.
I must tell you that last year and the year before, I did experience some kind of “magnetic field” or “cosmic force” when I was in one of the vortexes.  It is rather difficult to explain exactly what I felt, or to compare it to something everyone can relate to.  Something is going on, but I do not have a good explanation for it.  You will have to decide for yourself.
Mostly, Sedona has a rather eclectic vibe, harmonically speaking.  It keeps drawing me back each year for reasons unknown to me.  I could attribute it to my Sixties mentality.  By that, I mean the various cultural movements of the Sixties, not my age!  But it seems Sedona is full of people my age.  But I love the hiking, red rocks, quirky restaurants, and strange retailing.
The first several views of the magical red rocks are quite outstanding.  With the cloudy sky, many of the larger rock structures and hills were covered in various shades of light and dark.  The colors were both obvious and subtle, in almost the same minute.
We arrived in the late afternoon, and decided to head to The Barking Frog Grille for dinner.  They make the guacamole at the table!  Then, we split their famous black (berries) and bleu (cheese) salad.  Sheri had the signature halibut tacos, and I had the papaya chipotle white shrimp small plate.  We had to finish the dinner with a hot fudge sundae, even with the snow flurries outside. And it is quite cold outside.
Some of the snow is sticking, particularly up here on the mesa.  The Sky Ranch Lodge hotel is located up on a plateau adjacent to the airport.  The view is spectacular and clear, even in the snow flurries.  And did I say it is cold outside?  Why did I complain so much about the weather back home?

So, off for an early breakfast.  There seem to be no shortage of tourists here.  And we also had several Ducks on the plane to Phoenix from Oakland, no doubt some football players for the Nike/Oregon Ducks, here to play in the Fiesta Bowl.  And they were well-behaved too, I might add, much to my surprise.  But why are so many other passengers and tourists so giddy?  Do they think this is Vegas or Hawaii?  We shall see!

In 1987, Sedona‘s reputation as a spiritual center got quite a boost. Many journeyed to Sedona during the time of the highly anticipated
Harmonic Convergence.
Our Aetheism writer, explains Harmonic Convergence. On the weekend of August 16th and 17th, 1987, the great “Harmonic Convergence” was supposed to take place – at least, that is what José Arguelles told people. A great many believed him – not simply prominent leaders of the New Age movement like Shirley MacLaine, but also millions and millions of adherents.