Posted by golfkat on February 21, 2013
Posted in: Cultures, Food, Travel. Leave a comment
Do you remember the first time you ordered some take out Chinese food?  For me, we did not have a Chinese restaurant in our little town of 3,000 Swedes.  We did not even have a Swedish restaurant.  But we had the best French restaurant in the entire San Joaquin Valley, along with a burger drive-in, a steak joint (The Valley Inn), and that’s about it.  The nearest Chinese food was in Hanford, about 30 miles away.  It was called The Pagoda, and had a sister restaurant called The Imperial Dynasty, that was popular with the rich and famous of Hollywood.  We started eating there sometime in the mid to late Fifties. So for me, the first time I ordered Chinese take out would probably be sometime in the Seventies.  But Chinese restaurants have been around in the United States since the 1920s.  There are roughly 41,000 Chinese restaurants in the U.S., or nearly three times the number of McDonald outlets. Some controversy exists as to how this phenomenon came about.  The real truth probably lies in a fairly simple origin, with a family kitchen slowly expanding to help feed others in the Chinese community.  This would include Chinese miners and railroad workers.  Eventually, they allowed non-Chinese to either dine in or order take out.  It is as simple as that!  These first Chinese eateries of the mid-nineteenth century were called “chow chows.”   Remember that racism was rampant, and the Chinese were dubbed “rat eaters.”

An old nineteenth century Chinese place in San Francisco Nonetheless, local Chinese places often added familiar items to the menus to attract diners.  Items like roast chicken with currant jelly, and grilled dinner steak Hollandaise graced the mostly Chinese menu.  Another surprise was the great number of waiters wearing tuxedos, sort of like we encountered in Thailand. Apparently, the Chinese found customers in the almost equally marginalized East European Jews.  They flocked to Chinese restaurants to show they were becoming American.  After World War 2, many Americans began to see the Americanness” of Chinese food.  Though it became an “east meets west” cultural change, the Chinese were still made fun of and often scorned. Some Chinese establishments had the good fortune to give history lessons in their menus.  They also explained the origin of Chinese foods, like chop suey and the ubiquitous fortune cookie.  They even began to cite Confucius in the Sixties!  In 1967, the Ideal Toy Company brought out a Chop Suey board game, which involved picking up things with chopsticks!  Hilarious. 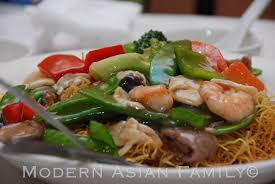 Love those noodles! Fortunately, multiculturalism and Nixon’s visit to China in 1972 brought cultural change and an “authenticity revolution.”  I actually remember the days when there were very few Caucasians in Chinese restaurants.  Now, it has done an about face in the suburbs of our country.  Most of the patrons are Caucasian, and very few are actually of Chinese origin, except in the Chinatowns of Oakland and San Francisco. 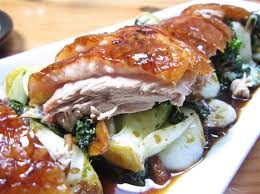 Love that duck!!! Interestingly, by the time I went away to college in the Sixties, a group of us would drive over to Oakland Chinatown for a big, but inexpensive dinner.  But our first stop was a grocery store, where we bought two liter bottles of soda pop.  We often went there on Friday nights, to break the monotony of dorm food, and to prepare for a weekend of drunken revelry. One of my favorite Chinese restaurant stories was located in West Berlin.  Looking for a break from heavy German food, my buddy and I found a Chinese restaurant near the hotel.  We walked in, and a very German waiter took our order.  I was somewhat worried since it did not have the “feel” of a typical Chinese restaurant, especially with the decor, and the lack of chop sticks on the table.  But once he took the order to the kitchen and opened the door, I could hear the Chinese chefs talking away in Cantonese at the top of their lungs.  Once satisfied we were going to get Chinese food made by Chinese chefs, we settled into a few German beers before lunch. The biggest concern today for some of us is the authenticity of the food.  Having been to Southeast Asia, and Hong Kong, Chinese food differs dramatically from here to there.  It is possible to find authentic restaurants here, though they have become quite rare.  The biggest challenge is finding the right ingredients.  The problem has subsided somewhat since there are more ethnic Chinese farms near population centers.  It would seem however, that Chinese food has not embraced the more healthy characteristics of the food scene at large.
I am not a big fan of the so called Pan Asian places, other than Roy’s, which is basically more “Hawaiian” than Chinese.  Yes, the food appears healthier, and the plates are smaller, almost tapas in concept.  The king of this concept is P. F. Chang’s or on a less expensive scale, Pei Wei.  However you eat it, at the restaurant, or deliver/takeout at home, the entire notion of Chinese food is totally different than its rather humble origin.