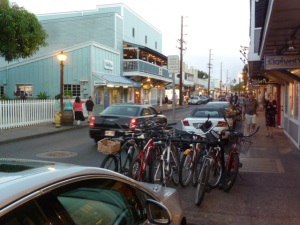 What does aloha really mean in the Hawaiian or English language? I have heard the obvious, like hello, or goodbye. I have also heard about the aloha spirit of the islands, perhaps the most important meaning for aloha. The Hawaiian language says aloha means affection, peace, compassion, and mercy. Only since the 19th century has aloha come to be used as “hello” and “goodbye”.

We also have come to know the islands of Hawaii as the Aloha State. The derivation of aloha comes from the Proto-Polynesian root, qarofa. Quite similar in meaning are the Samoan and Maori, meaning “love”.

Most of you have seen the famous Aloha Tower that once stood as the primary greeting landmark to Honolulu upon arrival by steamship. The aloha spirit inspired the name of the tower, which has greeted air and sea passengers since September 11, 1926.

I did not realize that singer and entertainer Bette Midler was born in Hawaii. Nobody asks for a copy of her birth certificate! As far as television goes, the detective show, Hawaii Five-0 uses the term “aloha” quite frequently. So do almost every TV, radio, or magazine advertisement for Hawaiian vacations. And do not forget Hilo Hattie (Clarissa Jaili), who appeared on the old TV show, Harry Owens and the Royal Hawaiians back in the Fifties. Harry was really from Nebraska, and wrote the song, “Sweet Leilani” for his daughter, Leilani.

Next comes the nearly ubiquitous aloha shirt, fancied by many, including yours truly. It still is the primary exported textile in the state of Hawaii. Most are printed, short-sleeved, and collared, not to mention sometimes bright and hideous. I prefer the more subdued Tommy Bahama brand of aloha shirts. Most of you do not know that aloha shirts can be worn by both men AND women. The lower hem is straight, and meant to not be tucked in!

Of course, my favorite type of aloha is Aloha Friday. At precisely noon, or any hour prior to that, the typical islander heads over to an ABC Store for a 12 pack of their favorite beer. Then, we head over to the beach, park, or shady spot on the roadside. Truth be known, I think Aloha Friday was the real precursor to casual Friday. Here’s to both casual Friday and Aloha Friday! See you in Maui and Kauai, bruddah!!!!