Home of “The Boss” (New Jersey)

Posted by golfkat on April 23, 2013
Posted in: Music, Travel. Leave a comment 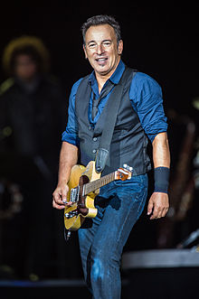 Most of you have heard the stories about New Jersey, its shore, Atlantic City casinos, and its favorite son, the inimitable Boss, Bruce Springsteen. It is the eleventh most populous state, serving as a sprawling suburb for both Philly and the Big Apple. True to form, Jersey has the third highest median household income. The name of the state comes from the largest of the British Channel Islands, Jersey, the home and birth place of Sir George Carteret.

But New Jersey is home to almost 9 million people, with per capita income ranked third highest in the U.S. I always thought of Jersey as the home to numerous big pharmaceutical companies, like J&J, Merck, and Pfizer. Yet farming is still viable here, with blueberry production second, and cranberries and spinach in third place. As a native once told me, Jersey’s greatest natural resource is its location!

Jersey is also home to Rutgers University, Princeton, Seton Hall, the New Jersey Devils professional hockey team, and the stadium that serves as the home of both the NY Jets and Giants. Sinatra was born here. Springsteen often sings of life here in Jersey. Other famous musicians are the Jonas Brothers, Queen Latifa, Lauryn Hill, Bon Jovi, Dionne Warwick, Whitney, Count Basie, and the Isley Brothers.

Every bad thing anyone has ever said about Jersey, is TRUE! It is definitely NOT a place to retire, or even visit!