Posted by golfkat on September 28, 2013
Posted in: National Parks, Travel. Leave a comment

Is this the only national park that stretches across the border of two countries? Glacier National Park in Montana crosses over into Canada (called Waterton 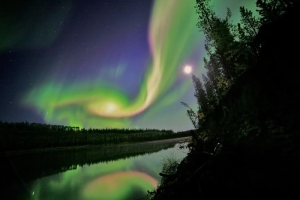 ), specifically both the provinces of British Columbia and Alberta. I would imagine that is unique for any of the U.S. National Parks. After all, the park coverage over a million acres, with over 130 named lakes, and over 1,000 species of plants and animals.

The only way to traverse the park is the Going to the Sun Road, which goes over the Continental Divide at Logan Pass. It was completed way back in 1932, as a probably Depression Era work project. A unique feature is the fleet of 1930s era red tour buses called “jammers.” The road itself spans 53 miles of rough going, with interesting, and spectacular views of Glacier. The entire project cost $2.5 million back in 1933 when it opened.

The road is rarely open during the winter, since it receives up to 80 feet of snow annually. The road is difficult to plow, taking upwards of ten weeks to plow. The plows can move upwards of 4000 tons of snow per hour. But this may mean only 500 feet of road cleared per day. The road opened when we were here in June. It closes in mid-October.

Going to the Sun Road is narrow and winding, especially west of Logan Pass. Vehicles are limited to 21 feet, meaning no recreational vehicles may traverse the park. Before construction of the road, it took 3 to 4 days for visitors to see the park. On our first trip here, we drove over to the eastern side of the park. I would strongly recommend against doing this since it is just awful over on the other side in Browning.

The red buses were called jammers since the bus drivers made a gear jamming sound when shifting on the steep roads of the Park. The jamming sound came from unsynchronized transmissions that had to be double clutched. They were tested first in Yosemite National Park in 1935. They were manufactured by White Motor Company from 1936 to 1939. The distinctive roll back canvas convertible top was designed by industrialist Alexis de Sakhnoffsky. Glacier operates 33 of their original buses to this day.

Glacier’s buses were restored by Ford Motor Company in 2000 to 2002 to run on propane or gas. The bodies were removed from their original chassis, and placed on Ford E Series van chassis. But the original transmissions have been replaced by automatic transmissions, removing the traditional jamming sound. Perhaps they should have a recording, and play it every time a “Jammer” shifts its way to the top of Going to the Sun Road.

So, it turns out we found more to do here. The list includes fly fishing lessons, a night at the swanky Triple Creek Ranch, and more cycling on the many bike paths here. Plus the weather is decidedly Fall, in the early mornings in particular. See you here next year!