Posted by golfkat on October 15, 2013
Posted in: Cultures, Food, Travel. Leave a comment

If Zagat says Kansas City barbecue is a must eat, then who am I to go vegetarian? In their quest to reveal the best of America’s culinary scene, KC’s barbecue ribs, brisket, pulled pork, and burnt ends stand out above all. Even the foul-mouthed Tony Bourdain thinks the ribs here are so good that it is on his shortlist of places to eat before you croak.

Here are the top-secret ingredients, stolen off the internet at noon today:

Here is the secret barbecue sauce:

Mostly KC barbecue refers to a slow style of smoked meat from the early 1900s. from the pit of Henry Perry. The meat is slow cooked over a variety of woods, then slathered with a thick molasses and tomato based sauce. The city has well over 100 barbecue joints.

Adding to their rib lore, they also cook up mutton, fish, chicken, turkey, pork, and beef. But slow smoking is the preferred method. Burnt ends, the crusty tips of pork and beef brisket, are a signature of the city. So also are their side dishes of slaw, fries, baked beans, and a variety of soul food items.

Back to Henry Perry, who started this craze, his business started in a trolley barn, where he served his ribs on newsprint for 25 cents. And though he came from a place near Memphis, his ribs were significantly peppery and harsh in comparison. Then along came the Bryant brothers after Perry died. They eventually moved close to Municipal Stadium, home of the KC Athletics (who now reside in Oakland). Too bad the barbecue could not have come along too!

It became so well-known that former US Presidents visited, including Jimmy Carter, Ronnie Reagan, and Harry Truman. Why didn’t Slick Willie make a visit? Though Bryant died in 1982, the place lives on. Leave it to a former employee, Arthur Pinkard to join up with George Gates to form Gates and Sons Bar BQ. Their recipe does not contain molasses. Gates has gone on to a total of six places, including a spot at Kaufman Stadium (for the Kansas City Royals), and Arrowhead Stadium (for the Kansas City Chiefs).

Perhaps the ultimate in barbecue was the formation of the Kansas City Barbecue Society, with over 15,000 members worldwide. Founded in 1985, it is the largest organization for barbecue and grilling enthusiasts. It is a non-profit organization dedicated to “promoting barbecue as America’s cuisine, and having fun doing so.” They sanction over 330 barbecue contests across the U.S. each year.

Here are the top 5 barbecue joints in KC:

I am certain that is more than you ever wanted to know about Kansas City barbecue. I decided, after numerous consultations with locals, that Arthur Bryant’ was the best choice. Plus it was just down the street from the 18th and Vine jazz area and museums. I could only eat half of what you see in the first photo. It has been like a meat pilgrimage. Now, I could use a statin to offset the cholesterol. When in KC, must do the KC Cue. 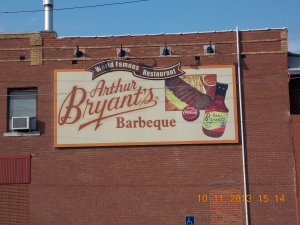