California’s tech cred is unmatched. The Golden State is home to many of the world’s digital giants, such as Apple (AAPL) and Google (GOOG), and its startup ecosystem is the envy of entrepreneurs around the globe.
Yet, among the 50 states and District of Columbia, it’s not the most innovative.

Bloomberg Rankings recently analyzed each state on several levels, including: the concentration of science, technology, engineering and mathematics (STEM) workers; research-and-development spending; the percentage of public tech companies; and patent approvals. Based on those and other factors, we came up with a list of the most innovative states.

Needless to say, California is ranked number two. Much like our NFL football teams, we both feature great defense, and a steady if unspectacular offense. Our states tend to mirror each other in many ways, except perhaps the weather.

Yes, Seattle has Microsoft, and Amazon, a plethora of biotech and tech companies. It has the most millionaires under the age of 50. It has great coffee, fantastically innovative cuisine, and forward thinking people. But like San Francisco, it also has homeless, and empty business fronts. It has tourists near the top of their revenue stream.

But the city has that high-tech vibe, whether in the workforce, or just hanging out as a tourist. Everyone is wired, but the Seattle crazies tend to be double or triple wired. I wonder what happens when they hit a dead spot?

As the world moves away from Microsoft, I wonder what this city will be like in 2020 or beyond? Will the thundering herd wear Google Glass, and trip over their own feet on their way to buy a latte’? Or will they figure something else and become human again? No matter, it is a curious and energetic place. I cannot wait to see what comes next!

I must also tell you that Seattle people, as a rule, are better behaved at concerts than in the Bay Area. Last night’s Paul Simon and Sting concert was fairly well-behaved. No pot smoking, 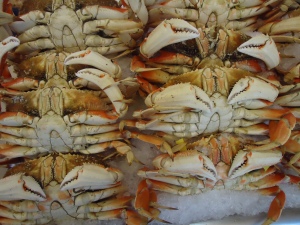 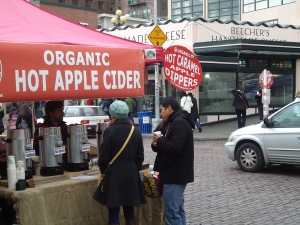 seat kicking, overly talkative audience. The venue leaves much to ne desired, the old Key Arena, originally built for the World’s Fair back in the Sixties. It is one of the main reasons their NBA team, the Sonics,moved to OKC, of all places.

We also enjoyed a couple of great meal yesterday, first at Seatown near Pike Market. We had a crab BLT, quite decadent, and a nice ahi burger. Dinner last night before the concert at Lola was equally superb, with the black cod and some brussels sprouts highlighting our meal. Of course, it never hurts to have Ben as our waiter! We topped it off with their famous coconut cream pie for dessert.