Posted by golfkat on March 23, 2014
Posted in: Entertainment, Travel. Leave a comment

Can you believe the median age of a flight attendant these days is 44! No wonder they call the older women flight attendants on United Airlines affectionately, “The Flying Mommas”. So rest assured, boys, they do not have a boyfriend in every city.

Another pet peeve of flight attendants, bring a pen on overseas flights! You will need to fill out some form of customs and immigration papers. Do not ask them for a pen or they will bite your head off.

Of the more than 300 times a flight attendant says hello or goodbye, only 40 of us respond. I wonder why?

Forget the Mile High Club. The bathrooms are cramped and dirty!

Some people either take their shoes off, or wear flip flops on the plane. But to make matters worse, they put their bare feet all over the seat in front of them. Yuck! I even saw one guy who had nail polish on his toes!

Did you know that on night flights, the flight attendants purposely delay serving the last meal? They are hoping most of us are asleep, fewer meals to serve and pick up, and fewer drinks to serve. Yes, they are smarter than they look!

When parents sit in first class, and leave the kids in coach, they always ask the flight attendant to check on their kids. Hello? So much for the concept of a family vacation. And do not even try to take stuff from first class back to them!

Sixteen is the average numbers of days each month that a flight attendant works.

Business travelers are the most annoying. They think they have priority. They want to be first in line, first for overhead space, and first to complain. You know who you are.

Why doesn’t someone stop the traveler carrying oversized bags or more than the allotted two on board? And what about the little old lady that cannot lift or even pull her suitcase down the aisle?

People who play their music so loudly, even with their headphones or earbuds on. Really, are you that desperate for attention. And who wants to hear that rap or twangy country anyway?

Then there is the idiot who fell asleep, and left his window shade up. Of course, everyone else has closed theirs so they can either watch the movie or sleep. He should get ten demerits.

One of the worst things I have ever seen is a mother changing a diaper on their seat or tray table! Yuck! Likewise for clipping finger or toe nails on the plane.

Here is an old joke: How many flight attendants does it take to change a light bulb?
Answer: None, they would rather sit in the galley and bitch about it!

Nine-eleven burst the flight attendant’s bubble. Their primary responsibility is patient safety. What happened? From that point on, their focus turned to patient comfort, not patient safety.

Now, imagine yourself on that Asian flight that “landed” at SFO, perhaps a little short of the runway. Who came to the rescue first? The pilots or the flight attendants? Despite everything that has been said about flight attendants, they came through that day. And they will again and again, because that is human nature, to help our fellow man or woman. 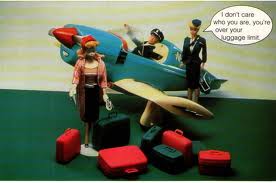 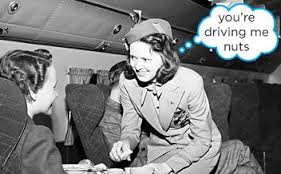