Posted by golfkat on April 20, 2014
Posted in: Cultures, Entertainment, Travel. Leave a comment 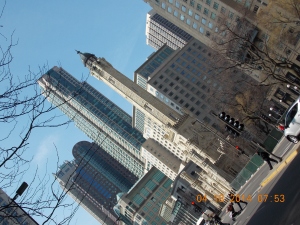 As Sinatra said, “my kind of town, Chicago Is My Kind of People, too…… Truth be known, the great Sinatra would change the words around from time to time. Here are the words, if you do not remember.

And each time I roam, Chicago is
Calling me home, Chicago is
Why I just grin like a clown
It’s my kind of town.

Melody by Jimmy Van Heusen, and lyrics by Sammy Kahn, it was nominated for an Academy Award in 1964, but lost to Chim, Chim, Cher-ee in Mary Poppins. How sad, but the song has obviously endured, and has special meaning for many of us who prefer Chicago to New York City.

More background information: The original context of the song, in the film Robin and the 7 Hoods, is the mob boss Robbo (Sinatra) having just been acquitted of murdering the sheriff, a crime for which he had been framed. He walks out of the courthouse and joyously sings the song in gratitude to the gathered crowd of Chicagoans. The people eventually join in the singing. Instrumental versions of the song make up the opening and closing credits, and a dance band also plays the song in Robbo’s speakeasy.

Chicago is a very manageable, for getting around, shopping, dining, sporting events, and hip vibe. Chicago is a friendlier city, people do not seem as rude, or as driven as NYC. They are willing to stop and give directions when you are lost. They will tell you about a good play they saw. And they will direct you to the nearest Garrett’s Popcorn shop.

It has been a few years since I wandered around Chicago. Last time I was here, I took Amtrak’s California Zephyr from Chicago’s Union Station to Martinez, CA. I am here this time for many reasons, one of which is a momentous side trip, for me. The other is to see an old friend, a Cubs game at Wrigley Field, and enjoy the best of what Chicago offers.