Why a Red Square?

Posted by golfkat on June 24, 2014
Posted in: Cultures, Entertainment, Travel. Leave a comment

Many people think that Red Square was a creation of Communist Russia. The red has nothing to do with the dirty Commie pinkos, but with the Middle Ages, when red meant “beautiful”. The gates to Red Square date only from the 1990s. It is hard to imagine how they held their May Day parades here. In fact, last evening, they were setting up a huge stage and concert venue for some upcoming rock concerts, with the likes of Aerosmith!!! Now put yourself back to Soviet times. Does Aerosmith and Red Square compute?

I missed sunrise over Red Square this morning, considered one of Moscow and Russia’s most breathtaking views. But I must tell you that last night, around midnight, I looked like downtown Disneyland! The big GUM Department store has bright white lights that make Red Square look like Christmas in May.

The west side of the Square houses the Soviet leader, Vladimir Lenin, who lies embalmed in the mausoleum of the west side. He preferred to be buried. In fact, the process to embalm Lenin was also used to preserve the great Vietnamese leader, Ho Chi Minh. The process and order to visit both are quite similar. You are expected to stand nearly at attention, no talking, eating or drinking, no smiling, no photos, and above all, you must show respect.

My hotel, oddly name the Hotel Budapest, is only a ten minute walk from Red Square and the Kremlin. Along the way, a most impressive array of pedestrian malls are filled with designer shopping, and expensive looking eateries, with outdoor seating in front. In other words, VERY European!!! It was a nice surprise.

Red Square, known here as Krasnaya Ploshchad, is without a doubt, one of the world’s most recognizable public spaces. In my mind, reality far surpasses anything I have seen on television or the movies about Red Square. The surface is very uneven, cobblestone, leading to a rounded peak in the center.

It became famous in 1434, when it became known as the “trading square”. And the Red Square name appeared in the 1660s. The word krasnaya means beautiful or important, as well as “red”. And as well know all too well, the name took on a whole different meaning during Soviet times in the 20th century.

The Communists raised their flags here, and held massive parades and military demonstrations. Thankfully, tanks no longer roll over the cobblestones. But it still hosts big parades, and the aforementioned rock concerts.

The Resurrection Gates are considered the “proper” way to enter Red Square. This is next to the History Museum. Besides St. Basils, there are two other churches on the Square. Kazan Cathedral is in the northeast corner. And a new, and they say kitschy Gate Church if the Iberian Virgin beneath the Resurrection Gates.

I got my own unofficial view last night. Today, I get the official Kremlin and Red Square tour with a local, English-speaking guide, Irina. I never imagined I would have this reaction to seeing this part of Russia and Moscow in particular. It is a city, at least so far, filled with large and magnificent buildings, along with the normal Soviet style architecture.

The last Sunday of every month, the changing of the guard takes place. I would imagine 28 days is a long time to stand there! Just kidding! And remember the Square was also used for executions back in the day.

But it was nice to see mostly locals, out on the town, dressed nicely, headed for dining and shopping. My Swiss friend, Michael, says it is a reflection of the end of the long, cold, dreary winter. People want to get outside, and enjoy their city, and all that it offers. Another important observation: most of the people walking around town were extremely well dressed young women. Rarely did we see groups or even solo young men. My conclusion: there must be a shortage of men, or ??

Again, I am looking forward to my day today, to be a tourist, in what appears to be a great place, in a great city. I just never expected to have this response to Moscow. 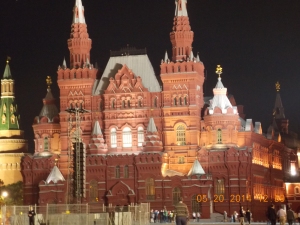