Posted by golfkat on June 26, 2014
Posted in: Cultures, Entertainment, Travel. Leave a comment

There is no Moscow Cow, only a silly drink called the Moscow Mule. The city of Moscow has very few cows or mules as far as I can see. But it does have the largest number of billionaire residents in the world. It is also the northernmost megacity in the world and the second most populous city (about 12 million) in Europe after Istanbul (and the 6th largest in the world).

Situated on the Moskva River, it has the largest forest area of any large city. And of course, it is home to the Russian Kremlin, and the residence of the Russian President (Putin). The Kremlin is one of several World Heritage sites in the city. The city also has four international airports, nine railway terminals, and one of the deepest underground metro systems in the world. Only the Tokyo and Seoul metros carry more people. The metro system has a staggering 188 stations.

For some of today’s problems, let it be known that in 1571, the Crimean Tartars attacked and sacked Moscow, burning everything but the Kremlin. Could the recent attacks and issues with the Ukraine stem from the wars of 1571? Even the Swedish army invaded in 1609 followed by the Polish-Lithuanian army in 1611. The plague of 1771 was the last major outbreak in Moscow, taking over 100,000 lives. And during the French invasion of 1812, over 400,000 French were dead by either the Russian army or the brutal winter.

After the failed coup during Gorbachev’s leadership, and the dissolution of the USSR, Moscow became decidedly more Western, in style, culture, art, and fashion. Moscow has a humid continental climate, with warm, humid summers, and very cold winters. For my May visit, the average temperature runs about 55 degrees F, with a normal range of 65 to 45.

Upon arrival here, and few points east of here along the TSR Route, the weather became significantly warmer. By the time I arrived at my hotel, I was ready for a hot shower and a very cold beer, or three.

Moscow is an impressive appearing city, with many wide and busy boulevards, sandwiched around cute little European style cobblestone streets. It is the modern and the old in a strange dance. It is a neoclassical building next door to a ‘gentlemen’s” club. It is a city and country in a great transition. It is so interesting!!!

I also took a tour of their fabled art work in the deep bowels of Russian soil, the almost ubiquitous metro train stations. It might have outshined Red Square and the Kremlin! You might even get to see some photos in a week or so. 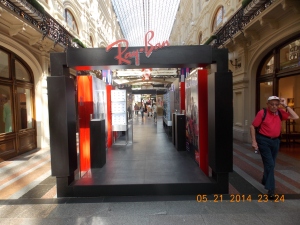