One question is have centers on why Chinese people still tend to cluster in the same geographic area.  Yes, there are Asian enclaves in large cities, like Koreatown in Los Angeles, and relatively small Japantowns in San Jose, Los Angeles, and San Francisco.  But Chinese immigrants tend to stick together for some unknown reason.  Even in San Francisco, Chinese have spread their wings to the Sunset and Richmond districts.

And a rather derogatory term has evolved, with Vancouver getting the nickname of Hongcouver.  My feelings are neutral, since people who decide to live in the same area, and mingle only with their own, will run the risk of being labeled in some fashion.  Vancouver has four Chinese daily newspapers. 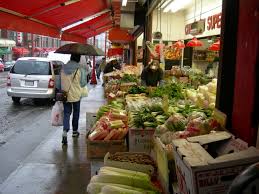 Yet housing and economic development are issues for Chinese, much as they are for the population at large.  But there are numerous Chinese businesses scattered throughout the city, notably restaurants, convenience stores, and noddle shops.  In fact, we enjoy a noodle palace directly across the street on busy Robson Street, the main shopping and entertainment thoroughfare of downtown Vancouver.

But most interesting is the Chinese food here in Vancouver.  My dear Chinese friends all tell me, after traveling the world, that Vancouver has the best Chinese food in all the world.  Let’s find out!!!!