Posted by golfkat on February 10, 2015
Posted in: Travel. Leave a comment
I have lost count on how many times I have been to the great state of Hawaii.  I have even been here on business back in the Eighties.  But every time has bee a special treat. And none more special than this trip, since my brother and his lovely wife will be with us on the Kauai portion of the trip.

We have traveled together only once before, on a trip half way around the world, to Australia and New Zealand.  Some Aussies thought we were twins.  Others, I told that Bob was my older brother.  In neither case, did he like that!  Of course, Hawaii will be different, since after a few days in he sun, most Hawaiians will think we are natives!!

The enjoyment on this trip will be showing them our favorite Hawaiian island, and introducing them to our friends, Rey and Corinne.  We are already prepping ourselves for the many food choices, as well as planning a barbecue at our condo.  We rented two one bedroom condos in Kapaa, on the central east coast of the island.

From here, we can make several short day trips to the North Shore, Princeville and Hanalei.  We can also head over to Waimea Canyon, known here at the “Grand Canyon of the west.”  But mostly, this island is about relaxing, hanging out at the pool or beach, visiting friends, playing some golf, renting a bicycle, and maybe take in a tourist adventure of two. 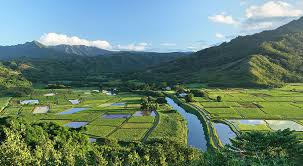 As most of you who visit Kauai know, there is basically just one road around the island.  And in fact, it circles only a portion of the island, with the extreme north west shore unreachable by auto.  My very first trip to Kauai found us at a big tennis resort in Hanalei.  But I found that we were driving to Kapaa, Lihue, and points south almost every day.

And who knows, it might be fun to try something new.  Or maybe even a new place to eat, which is really rare on this island.