Great Train Stations of the World

Posted by golfkat on May 1, 2015
Posted in: Food, Shopping, Travel. Leave a comment

My travels around the world often involve taking the train.  In many parts of the world, it is preferred over air travel or perhaps the only transportation available AND affordable.  Once or twice in your life, take the time to travel by train, whether on AMTRAK here in the US, Eurail in Europe, or the Shinkansen in Japan.  It will be worth your time, and you will gain a great experience.

Here are some of the most beautiful stations in the world:

San Pancras International, London  After an 800 million Pound makeover, it is truly a masterpiece worth visiting, even if you do not take the Eurostar to Paris.  They restored 8,000 panes of glass on the ceiling, and removed 300,000 of dirt from the bricks.  It is quite a sight! 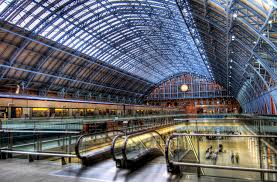 Union Station, Los Angeles   Designed by the father and son team of Don and John Parkinson, it serves as the western terminus for Amtrak’s Sunset Limited, which I took to the Super Bowl in New Orleans.  It also supports a bus service to Dodger Stadium.  The exterior reminds me of a typical California mission.

Gare du Nord, Paris   See it in Bourne Identity, starring Matt Damon.  It is one of the busiest and prettiest in all of Europe, with a façade containing 23 statues.  It is a most impressive way to arrive from London on the Eurostar, or from Charles de Gaulle Airport.  It is due for a big makeover, with more retail, and electronic departure and arrival board.

Union Station, Washington, DC   The station was modeled after the Arch of Constantine and the Baths of Caracalla and Diocletian in Rome.  It is finished in white granite and dark mahogany.  More than 70 pounds of gold leaf were used on the ceiling.  It also has the distinction of hosting several Presidential Inaugural balls.  and it has a decent amount of retail now.

Kuala Lumpur Railway Station, Malaysia  Designed by architect A. B. Hubback in a Moorish design,  it is widely used by commuter trains in KL.  The minarets remind me of Russian churches.  And it smells like curry!

Grand Central Terminal, NYC  The façade on 42nd Street houses a Tiffany clock.  The gold and cerulean blue ceiling with fiber optic stars is famous around the world.  The place just says “New York.”  Oh, and it is a great place to people watch, IF you have the time.

Irkutsk Train Station, Siberia  I was in such a hurry to get to Lake Baikal, I almost forgot to admire this grand station.  One of the busiest stations in all of Siberia.  And only 80 hours from Moscow!!!

I think you get the idea.  I enjoy trains and the great stations of the world.  I plan on taking more.  Perhaps in SE Asia, or Latin America, even Africa.   How about you?