Strange Eats Across the Universe

Posted by golfkat on May 29, 2015
Posted in: Cultures, Food, Travel. Leave a comment
Many of you have asked me about the food that I eat on my trips around the country and world.  Some things are fairly normal, and some are much different (read that as strange) from home.  We are very spoiled here in California, with the freshest of all ingredients, whether surf, turf, or earth.  Our fruit and vegetables are the best.  You can imagine that this is not the case in some places.

Surprisingly, the Third World countries have fresher food than many of the more developed countries.  The meat is butchered that morning, and the vegetables are harvested in the wee hours of the morning.  The food comes together at lunch or dinner, at a roadside home, food truck, or just a wide spot in the road.  Here are some of the most memorable:

1.  Durian in SE Asia (Malaysia, Thailand, and Laos).  Durian is known as the stinky fruit, as well as the “king” of fruit.  It is unique in its appearance and taste, which I compare to a cross between stinky sweat socks and rotten onions.  It has the consistency of custard, and resides in the center of a hard and spikey exterior in the shape of a rugby ball.

2.  Omul in Siberia (Russia).  Omul is a fresh water fish that is found only at Lake Baikal, often called the Baikal omul.  It is a whitefish species of the salmon family, and is considered a delicacy.  From my experience, smoked omul is quite good, and goes well with a cold beer.  Omul served in a restaurant is usually in the form of a saucy fish pie, for lack of a better description.  The smoked form is infinitely better, and purchased at open air markets.

3.  Snake in Hong Kong, and Colorado.  Many restaurants specialize in one particular type of “exotic” ingredient.  But, Chinese preparations take on the flavor of the sauce and accompanying ingredients, whether vegetables or spices.  The familiar phrase, “it tastes like chicken” is true.  However, rattlesnake in Colorado had the taste and consistency of canned tuna.

4.  Body parts of rodents in Chiang Mai (Thailand).  Whenever you order a bowl of noodles, it would be best to take a peek inside the bowl, or just go with the flow.  A tiny rodent heart helped form a delicious broth for our noodle soup was a big surprise to all of us.

5.  Rinones and mollejas in Buenos Aires (Argentina).  For those of you who do not speak Spanish, the body parts are kidneys, and thymus gland, aka sweetbreads.  When you dine at an Argentine steak house, be prepared to get a variety of beef parts.  Beef emporiums in Brazil tend to be a little more genteel.  Always drinks lots of red wine, malbecs in particular.

Show me the “beef”

6.  Larvae in Vietnam and Bangkok.  Beetle, silkworm, ant and sago larvae are in great demand, and considered a delicacy in most regions of the world, including SE Asia.  My particular version was caramelized in butter and sugar, and pour over a nice scoop of vanilla ice cream.

Street vendors have many types of larvae for sale

7.  Coulibiac in St. Petersburg (Russia).  This is a Russian pie filled with salmon or sturgeon, rice, mushrooms, onion, and dill.  It is baked in a pastry shell, which is often a true work of art.  I wish I could say it was delicious.  This is perhaps one of the best ways to ruin a good salmon or sturgeon.  It was so popular in Russia, that famous French chef Auguste Escoffier brought it to France and placed the recipe in his famous cookbook.  What a mistake!  Wash it down with a tall beer, several, in fact. 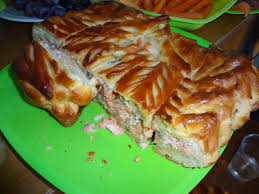 8.  Haggis at St. Andrews (Scotland).  The home of golf is home to some very strange food, like blood sausage (aka black pudding) and haggis.  Haggis is pudding made of sheep’s heart, liver, and lungs.  Also added are onion, oatmeal, spices, stock, and encased in the animal’s stomach lining.  You can blame the English for this creation, since the Scots invented golf, thankfully.  I did try it, as it appeared rather innocuous, but tasted lethal!  Never again.

9.  Bird’s nest soup at Chinese restaurants around the world.  The saliva from bird’s (swiftlet) nests are used to make this soup, a delicacy served at banquets, like weddings, Red Egg parties, and Chinese New Year celebrations.  The red next version is said to cost $10,000 USD.  Many stores in Asia are dedicated to selling just this single product!

10.  Guinea pig or cuy in Cuzco (Peru), and Quito, Ecuador.  Leave it to my travel buddy, Mike, to eat this family pet not just once, but again in Quito.  The meat is quite gamey, and very greasy.  It certainly does not qualify as health food.  Locals say it tastes like rabbit.  Not!!
11.  Bush meat in Botswana (Africa).  Certainly, when on safari, you must try to eat what you have seen.  Also called game meat or wild meat, this includes:  wild boar, elk, gazelle, guineafowl, springbok, kudu, crocodile, and water buffalo.  We also tried the dried or “jerky” version of these meats, called biltong, various animals, and various flavors.  It goes well with beer.  BUT, infected bush meat was the cause of the 2014 Ebola outbreak!  My friend, Barry the V is the resident expert there.

springbok
12.  Whale meat at Tsukiji Fish Market in Tokyo (Japan).  Purely by chance, the whale meat vendor overheard us talking to our guide about whale meat he was forced to eat in the school cafeteria.  The vendor promptly sliced a batch, poured some soy sauce over it, and let us eat several pieces.  Quite good, though whale meat is full of mercury and other toxins.
13.  Kangaroo, emu, and ostrich in Port Douglas (Australia).  These animals have no natural predator, and are eaten for fear of overpopulation.  The meat tastes mostly like a richer, redder beef medallion.  Again, grab your favorite red wine, and dinner is ready!

emu
14.  Lutefisk from Kingsburg, CA and Scandianavia.  Yes, I grew up in a little town with about 3000 Swedes.  Lutefisk and Swedish sausage were a big deal.  This dried whitefish treated with lye was the “butt” of jokes throughout high school.  Why ruin perfectly good fresh fish? 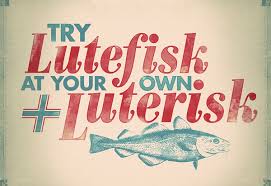 Things I will never eat are balut or duck embryo (Philippines), bitter melon (any Chinese restaurant), sea cucumber (some Japanese restaurants), tarako or cod roe (Japanese restaurants), cobra blood and vodka (Vietnam), jellied moose nose (Alaska), fruit bat soup (Guam or Africa), and dried lizard (China).
I am sure I left off some perfectly good food.  Or worse yet, perhaps I left off things that I may not have recognized now or at the time.  But trying these things are part of the travel experience, getting close to the people and their culture.  It is a wonderful way to find out about someone else’s world.