Posted by golfkat on June 16, 2015
Posted in: Cultures, Travel. Leave a comment
Much has changed with Washington wines in the twenty years we have been visiting this great city.  All we knew about wines back then was Chateau St. Michelle, which was also one of the big shippers to California.   Washington wines are now a three billion dollar business, but it did not start with much promise.

Before the research of two men, Walter Clore, and Chas Nagel, Washington did not have a wine industry.  It had a small dessert wine and fortified wine industry, based solely on Concord grapes.  California was the big wine making region and producer.  And it was the giant producer, Ernest and Julio Gallo that helped educated the American wine drinking public.

For the state, everything changed in 1969.  Legislative hearings were held in Seattle and Yakima, to determine whether the state’s protectionist wine laws should be overturned.  Those laws made California wines (vines) illegal, allowing the Concord grape industry to dominate.  It was a disincentive to grow varietal grapes and make fine wine.

The two Washington State University horticulturists, Clore and Nagel, told their lawmakers that they could no longer compete with California grapes that go into wine and jelly.  They had been researching the potential of “vinifera” type grapes and grape issues in the Yakima Valley.  Bottom line, Clore felt that Washington wines could compete with California wines in the fine wine market.

He was right, of course.  Washington is located on the same latitude as many fine wine growing regions in Europe.  In addition, Washington has a longer growing season, and more intense sunlight.  And maybe best of all, Washington did not have California’s insects and vine diseases.  The only negative was the number of days with temperatures below zero.  Clore and his crew felt that Washington could actually grow better wines than their California competition. 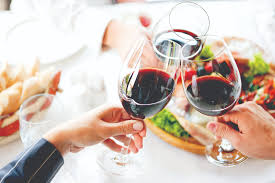 Nagel then added his testimony, stating that in tasting comparisons, Washington wines were quite favorable with wines grown elsewhere.  So, despite intense lobbying from California, the law changed here in Washington.  Within just a few years, Washington had a hit with some Rieslings.  All of a sudden, Walter Clore became the “Johnny Grapeseed” of the wine business.  In addition, Clore has a wine book called, “The Wine Project”, which sounds like a good read.

The first wine grapes in Washington were planted near Fort Vancouver, in 1825 by the Hudson Bay Company.  By 1910, wine grapes were being grown throughout the state, since they followed French, German, and Italian immigrants.  Hybrids arrived in 1854,  and by 1860, wine grapes were planted in the Walla Walla Valley.  Irrigation began in 1903, opening up land with a sunny and arid climate.  The German and Italian varietals were planted in the Yakima and Columbia Valleys, as wine continued to expand in the early 20th century.

The vineyards of W.B. Bridgman of Sunnyside in the Yakima Valley were important, as their muscats are still producing, and considered the oldest in the state.  Despite Prohibition, wine making was done at home, and by 1938, there were 42 bonded wineries in the state.  The first commercial plantings occurred in the 1960s by predecessors of Columbia Winery and Chateau St. Michelle.  Wine historian Leon Adams introduced enologist Andre Tchelistcheff to Chateau St. Michelle’s early efforts, and mentored today’s modern wine making here in Washington.
Now, they say a new winery opens every 15 days.  On our farm to table dinner out in Prosser (Yakima Valley) last October, we could see huge amounts of land being cleared for vineyards.  The industry is now $4.4 billion strong, with distribution in all fifty states and more than forty countries worldwide.  Washington ranks second to California in premium wine production, with over 50,000 acres planted with vinifera grapes.  Forty percent were planted in the last ten years!
Of course, the growth of Seattle as a tech center has also been a big boost to both the wine and food industries.  The city is as well known for its innovative chefs and cuisine, as it is for Microsoft, Boeing, EMP, and Amazon.  It seems to be a perfect marriage, at just the right time.

We love our trips here.  Last night, we celebrated our Anniversary at Lola.  The co-owner even comped us three dishes!  We feel very fortunate, though I am not a fan of braised carrots, or spanakopita.  But the sheep’s cheese was outstanding.  We look forward to another nice and sunny northwest day.