Just Places on a Map

There are three places, just places that standout as geographic markers in my travels.  Nobody ever goes to these places as part of a real itinerary or “bucket” list. But after having gone to all three, it seems like a good time to reflect upon each of them.  I will list them in the order in which they were visited.

Cape Horn, near the tip of South America, lies within Chilean territorial waters.  The Strait of Magellan, named after Ferdinand, located between Tierra del Fuego and the mainland is the major ship passage.  The Beagle Channel (named for Chuck Darwin’s ship) between Tierra del Fuego and Isla Navarino is another potential ship route.  My buddy Mike and I took a little water excursion through the Beagle Channel when we visited the world’s southernmost city, Ushuaia (Argentina).  It was winter, and very cold.  Did I say very cold?

I am not sure exactly where the Pacific Ocean meets the Atlantic, but I would say we were close enough by any standard.  Ushuaia is a fun little town, full of skiers, beef emporiums, and family vacationers.  The only problem was getting back up to Puerto Montt, Chile, which required a 12 hour bus ride through Argentina and Chile.  The alternative was to fly back through Buenos Aires, which we already visited.  We chose the bus. 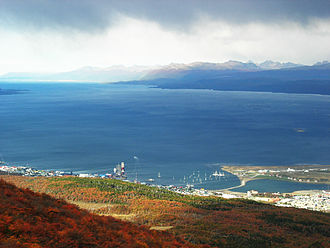 The Beagle Channel from Ushuaia, Argentina

There is a common misconception that the Cape of Good Hope, at the southern tip of Africa, is the dividing point between the Indian and Atlantic Oceans.  But the southernmost point is actually called Cape Agulhas, 90 miles to the east south-east.  The warm water Agulhas current meets the cold water Benguela current and turns back on itself, at a point that fluctuates between Cape Agulhas and Cape Point.

We actually drove out to Cape Point, visited the nearby penguin colonies, and even thought of going swimming in the shark tank!  We decided on  a harbor side lunch and some beer instead.  Wise choice in my opinion.  Our erstwhile host, Barry the V took us to all of the high points of Cape Town, good and bad.  He is a wild and crazy guy!

This short little story ends with a visit to the Equator, an imaginary line that circles the globe equidistant between the North and South Poles.  It divides earth into the Northern and Southern Hemispheres.  Other planets have similar equators.  But the earth’s Equator is 24,901 miles long, and crosses water  for 78.7% of the line, and land only 21.3%.

On our trip to Ecuador a few years back, we stopped at the Equator twice.  In fact, the Republic of Ecuador takes pride in being part of the Equator, since it’s name translates into “Republic of the Equator”.  The first known line was established in 1743 by the Geodesic Mission of French Academy of Sciences.  Perhaps many of you have crossed the Equator on an airplane, sailed over this imaginary line, or visited another country which intersects this famous line.  These could be Uganda, Kenya, Indonesia, Colombia, Brazil, Somalia, the Congo, Gabon, or Lake Victoria.

So, yes we three, Mike, Barry and I, stood on the Equator in two different “tourist” places.  They coincidentally either charge admission or strongly suggest a donation.  We saw the water drain clockwise on one side of the Equator, and counter clockwise on the other.  But we did refrain from buying any Equator souvenirs.  While it was not the highlight of Ecuador, it did come close.  It was right behind chocolate and cuy!