Posted by golfkat on July 17, 2015
Posted in: Action, Cultures, Entertainment, Golf, Travel. Leave a comment
Locals do not say Saint Andrews, they say “sun-Andrews”, with great pride.  This is golf’s holy land, the sacred fairways of St. Andrews.  Golf has been played here since the 1100s, well before Columbus landed somewhere on the Western Hemisphere. And yes, anyone with a handicap below 15 can play here.  It is possible to breathe the same air, take divots from the same turf, as Old Tom Morris, Bobby Jones, and Arnold Palmer.  But on most Sundays, it is a public park, where you are free to walk, run, and picnic anywhere on the course.

This year’s Open, as the Brits call the British Open, is the 29th on the Old Course.  The biggest difference in the Old Course is the enlargement of the famous Road Hole Bunker on the 17th hole.  It was, according to some, sacrilegiously widened by a foot or two!  The total yardage is unchanged, at 7,297 yards, only 8 yards less than in 2010. 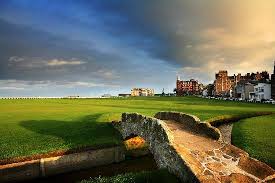 St. Andrews is the place where famous golfers come to say goodbye.  We can all remember when Arnold Palmer stood on Swilcan Bridge, playing his final Open in 1995.  Then Jack followed in 2005.  This year, the youngster, Tom Watson, now 65, and a five time Open winner, will take his turn to say goodbye to the British crows that embraced him for 40 years.

Like some of you, I have stood on the same place on Swilcan Bridge.  It is as magical a moment, as gazing at the Sistine Chapel, or climbing up the steps at Angkor Wat in Cambodia.  It was probably the pinnacle of my now long lost, semi-acceptable golf game.  At that moment, I felt like Bobby Jones, Arnold Palmer, or Old Tom Morris.

My two shining moments were driving the 9th fairway green with a 3 wood (356 yards) (must have been very windy?) and making a birdie, and getting out of “Hell” bunker in only two shots!!!  Post golf includes grabbing a pint or two at a pub near the 18th green.  Shopping for gifts and golf stuff is basically golf shopper’s nirvana.  The food still needs work, however.

I love St. Andrews, perhaps as much as Pebble Beach.  Rarely does a round of golf go by now, that I do not make a reference to the great Old Course, from the double greens, the Road Hole Bunker, or the rough and tumble Scottish caddies that give the place its charm and color.  Needless to say, I have stories that can only be told on the golf course.  And I love watching The Open on TV, as I am this week and weekend.

I guess I said hello and goodbye on the same visit.  If you play golf, you must go!!!