One of the most enjoyable places to eat, visit and play is the Gaslamp Quarter in downtown San Diego.  The rescue of the area from its dreary, seedy and somewhat dangerous past and present began in 1974.  Business and property owners banded together under the leadership of former city councilman, Tom Horn.  Gradually up through 1989, Gaslamp began to take shape, until the famous Gaslamp Archway is officially completed and dedicated.  Today, there are over 200 restaurants, bars, shops, art galleries, boutiques, and cigar dens to peruse and partake.  The Gaslamp Foundation has the goal of celebrating the founding of modern San Diego from the earliest attempts to the current successes.

I can certainly skip the cigar joints on this or any trip.  But one highlight I always tell any of you who visit, is Croce’s Restaurant and Jazz Bar.  Ingrid Croce opened the restaurant in honor of her late husband, Jim Croce.  She transformed the blintz-based business, Blichiki’s, into what has become a dining destination.  But music is in her soul, and  and she expanded until she had a bar, cafe, and live music venue.  Basically, the sound of music from her 5th Street establishment transformed the street and made the Gaslamp area jump!

Even if you don’t eat or listen to music here, you must view the walls where his original musical writings are preserved.  All the song that you recognize are somewhere, on a piece of binder paper, on a cocktail napkin, or on some scrap paper.

The Gaslamp Quarter is listed on the National Register of Historic Places, and covers an area of 16 1/2 blocks.  It includes 94 historic buildings, most of which were constructed in the Victorian era.  The area was once called Stingaree in the late 1800s.  Wyatt Earp and his wife lived here and invested in real estate and saloons.  Many celebrations are centered down here, like St. Patrick’s Day, Mardi Gras, music festivals, and ball games at nearby Petco Park.

My favorite place to eat down here is Bluepoint Coastal Cuisine at 565 5th Avenue.  Besides the Sunday night King Crab extravaganza, fresh seafood is available every day, with valet parking, and a vibrant bar scene.  It is THE place to eat down here. The Beef and Reef special includes a Caesar salad, filet, and lobster tail.  Fresh fish and shellfish dominate a pricey, but excellent menu.  They also have great bartenders!

After dinner, walk around the area, if you can handle all of the cigar smoke.  These are not Cubans, but many Latinos from south of the border who know how to roll the tobacco leaves.  I hate to say, most obnoxious are the foursome of golfers, all of whom must put a stogie in their mouth while they walk the streets for a place to eat or drink.  But please don’t let that stop you from exploring the shopping in the area.  If you can’t stand it, go to nearby Horton Plaza, and shop at the usual suspects of chain stores.  But this is where the charm of San Diego is omnipresent.

As I was walking around on my last trip here, I ran into, none other than the voice of the San Francisco Giants, Hall of Fame broadcaster, Jon Miller.  He was walking briskly to lunch, I could tell.  He hesitantly acknowledged my greetings, we exchanged a few pleasantries, and off he went to grab some food.  I know when I am playing second fiddle to his lunch!

This year, we are staying out in Old Town.  But it is only a 25 minute trolley ride to the Gaslamp District, and Petco Park.  The fare is only $1.50 each way.  I think the Giants fans outnumber the Padres fans at the game.  Today will be the rubber game of the series here.  Three games in 3 days, baseball nirvana!

PS:  The area has become a little sloppy again.  Many retailers have left.  Homeless abound, as do druggies and panhandlers. 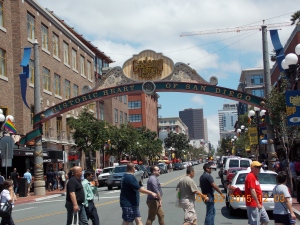