San Diego has always been a favorite destination, whether for golf, sightseeing, holidays, or the amusement parks when the kids were young.  Of all the places in the world, San Diego has perhaps the best year around climate with an average of 70 degrees.  Add to that, over 70 miles of pristine beaches, making it a playground for all ages.  Most people do not realize that San Diego is the second largest city in California, with 1.3 million residents. And it has a staggering 92 golf courses!  And to think, we almost moved here last year.

The San Diego Zoo is perhaps one of the best in the world.  Torrey Pines Golf Course hosted the U.S. Open recently when Tiger won in a playoff on one good leg.  The downtown Gaslamp area is an interesting dining and shopping area filled with people enjoying the area at all times of day and night.  Coronado Island is a playground for adults and children alike.  Lindbergh Field, San Diego’s airport, is one of the most dangerous airports, with runways and landing patterns too close to housing.

Did we all have a crush on Winnie?

Many years ago (in the 70s), I had an office down here in San Diego, down in Mission Valley.  I flew down here about 3 or 4 times a month, and got to know and appreciate the area quite well.  In those days, I played tennis.  So, I naturally began to hang out at Balboa Park’s tennis courts at night. I actually had access to a company apartment, but it was much too rowdy for me.  I usually ended up staying at the old Town and Country Hotel in Hotel Circle.

Old Town San Diego has a charm that is worth exploring.  The area has the feel of a cleaner, safer version of Tijuana or perhaps Guadalajara.  While many people view it as a tourist trap, I have had some excellent meals here in the past.  I dare you to walk by the areas where they are making fresh tortillas.  I know you will buy a few to munch on until meal time.  And the beer does seem a little colder and more refreshing down there too.  Parking is a real hassle however.  But we are staying in Old Town this visit. 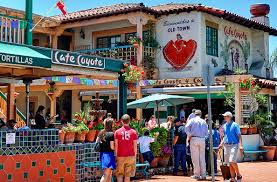 During the rather warm (read that as HOT) summers in the San Joaquin Valley, San Diego will be a welcome change in weather and culture.  Along the way, we will make a few stops, first the famous Troubadour in Los Angeles, and second, a visit to my favorite Aunt and Uncle in Long Beach.  They have a tradition of a Sunday night dinner at their home, with their two daughters, husbands, and their now grown children.  And we love to be a part of it!