Where is San Diego, Carmen?

Posted by golfkat on July 28, 2015
Posted in: Cultures, Entertainment, Golf, Sports, Travel. Leave a comment
Where in the world is Carmen San Diego?  Remember when that game came out?  Carmen Sandiego was a fictional character in an educational software program produced by PBS.  It was designed to teach geography and history, later branching out to other subjects, books, and other licensed products. 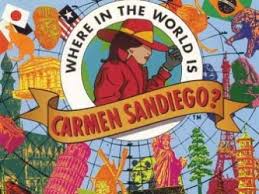 “Where in the World is Carmen San Diego” was published in 1985.   Wiki says:  The goal of this game is to track Carmen’s villains around the world and arrest them and ultimately arrest Carmen herself. In order to make an arrest the user must have a warrant and, obviously, it has to be the correct warrant. The player begins the game by first going to the city where the crime took place, and then obtains hints from the bystanders on where the thief went next, leading them on a chase around the world to find the thief before they “get away.” In the process, they must also collect clues on their identity in order to determine who the culprit is. When they reach the place where the villain is going to pass off the loot to Carmen they have to arrest the villain. 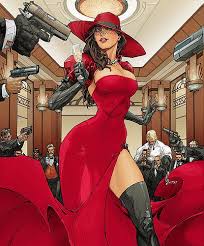 But this visit is not about finding Carmen Sandiego, but rather to enjoy this great coastal city, its fine weather, and see a few San Francisco Giants games at Petco Park, home of the San Diego Padres.  We have done this trip the last two summers, and felt it was worth a repeat trip.  We stay in a hotel near Old Town, and drive to the Gaslamp district for ball games and meals.  We also will head out to Temecula for some wine tasting.

According to the map, San Diego is 120 miles from Los Angeles, and sits almost directly on the U.S. Mexico border.  The population is 1.4 million as of last year.  The city has done an excellent job of keeping it from becoming another “Los Angeles” so to speak.  It has a mild climate, a growing wine industry, a deep water port, strong ties to the U.S. Navy, and emerging healthcare and biotech development center.

The area was first claimed for Spain, and named San Miguel by Juan Rodriquez Cabrillo in 1542, though the Mission and Presidio did not follow until 1769.  Francisco Vizcaino renamed it San Diego in 1602.   It became part of the U.S. in 1850, shortly after the Gold Rush, and the Mexican-American War.

As a child growing up in the San Joaquin Valley, we always thought of visiting the famous San Diego Zoo.  As an adult, I once had an office in Mission Valley when I worked for a Bay Area health care consulting firm.  My almost weekly visits to the area allowed me to learn much more about the area, as well as enjoy its beaches, sporting events, and better restaurants.  I remember playing tennis out at Balboa Park and San Diego State.

And the Torrey Pines Golf Course just up the road in La Jolla has hosted two U.S. Opens, and a yearly stop on the PGA Tour.  I can bring my golf clubs, bicycle, and champagne glass.  They all seem to have a place here.  In fact, we thought about moving here when we relocated to Clovis last fall.  The area has much to offer, including just abut the best weather in the state, maybe the entire country.  Of course, I say this as we leave 100 degree plus weather in the Valley.