Posted by golfkat on August 15, 2015
Posted in: Cultures, Food. Leave a comment
Another “only in the Valley” event is on the books today, the 2015 California Fig Fest at Fresno State. I might be the only one there who does NOT like figs.  I have a real problem with its texture.  But many of you do, including Sheri.  It brings to mind a rather serious fig incident in Cuzco, Peru some years back, on our way to famous Machu Picchu.

Sitting at breakfast with Sheri and Mr. Mike, we were eating a light meal before boarding the famous train to Machu.  When I saw Sheri eating a fig, I asked if she peeled or washed it.  Short answer: no.  Long answer:  several days of GI distress, and even a visit from the house doctor in Machu.  Lesson learned!

But back to more pleasant matters.  The San Joaquin Valley is the leading grower of figs in the U.S.   The major varieties frown here are:  brown turkey, black mission, kadota, calimyra, sierra, and tiger.  Peak season in now through September.  Of course, dried and frozen figs are available year round.

The Fresno State event will include:  fig tasting, a chef’s competition, fig-inspired food, entertainment, and a visit from a celebrity chef named Fabio Viviani, whoever he is.  But they will have beer and wine for people like me, I hope.  And some local food trucks.  I am told one particular dish will cover the fig with bacon, as well as a pasta dish with figs, prawns, and cilantro pesto.  Last yea, first place was a fig pizzetta, with blue cheese, mozzarella, fig jam, and candied pecans.

I could probably handle some dried figs in trail mix or a smoothie.  Maybe I can dry some figs, and stuff them with walnuts?  I know they are a healthy food to eat, being high in calcium, fiber, iron, and potassium.  Fig prices run the gamut, from self pick bargains to large buckets on sale for $10.  I leave it to you to find your fig bliss. 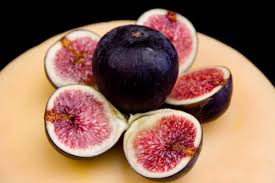 Some fig factoids:  Figs grow on the Ficus tree (Ficus carica), which is a member of the Mulberry family. They are unique in that they have an opening, called the “ostiole” or “eye,” which is not connected to the tree, but which helps the fruit’s development by increasing its communication with the environment. Figs range dramatically in color and subtly in texture depending upon the variety. The majority of figs are dried, either by exposure to sunlight or through an artificial process, creating a sweet and nutritious dried fruit that can be enjoyed throughout the year.

Fig history:  Figs can trace their history back to the earliest of times with mentions in the Bible and other ancient writings. They are thought to have been first cultivated in Egypt. They spread to ancient Crete and then subsequently, around the 9th century BC, to ancient Greece, where they became a staple foodstuff in the traditional diet. Figs were held in such esteem by the Greeks that they created laws forbidding the export of the best quality figs. Figs were also revered in ancient Rome where they were thought of as a sacred fruit. According to Roman myth, the wolf that nurtured the twin founders of Rome, Romulus and Remus, rested under a fig tree. During this period of history, at least 29 varieties of figs were already known. 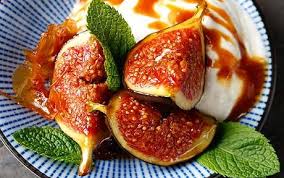 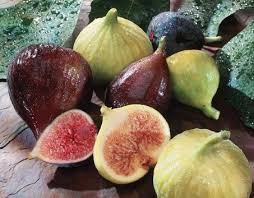 Fig warning:  Figs are among a small number of foods that contain measurable amounts of oxalates, naturally-occurring substances found in plants, animals, and human beings. When oxalates become too concentrated in body fluids, they can crystallize and cause health problems. For this reason, individuals with already existing and untreated kidney or gallbladder problems may want to avoid eating figs. I would guess to stay away from teas, which are also high in oxalates.

Fig knowledge:  In ancient Greece, Figs were regarded with such esteem that laws were created forbidding the export of the best quality figs. Sycophant then derives from the Greek word meaning one who informs against another for exporting figs or for stealing the fruit of the sacred fig trees. Hence, the word came to mean a person who tries to win favor with flattery. And for you science nuts, the study of figs is appropriately called, Figology.  And please, no jokes about Figgy pudding!!! 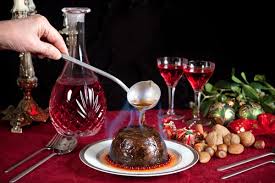 Yes, Virginia, there is a real Figgy pudding!!

So, the mighty fig has risen again!!!  I could actually see some obscure college calling themselves the Mighty Figs!!