Welcome Back to Hanoi!

Posted by golfkat on October 10, 2015
Posted in: Cultures, Entertainment, Food, Shopping, Travel. Leave a comment
In my travels throughout SE Asia, Hanoi has always been a favorite, though I have only visited once.  I am not sure if it is the French influence on culture and food, the spirit of the people, or the total chaos that is Vietnam in one big city. It is probably a little bit of all of those things.  I really did not enjoy seeing the sights, like the Ho Chi Minh Mausoleum, the Temple of Literature, or the Museum of Ethnology.  It was the hustle and bustle of the city, the crazy weaving motorbikes through the boulevards, and the sights and smells of unidentifiable but delicious smelling food on the streets.  This time, we will skip the tourist sights.

Under French rule, French colonial style architecture became dominant, along with tree lined boulevards.  I am so glad the U.S. did not bomb Hanoi.  It is a real treasure, both visually, and culturally.  In fact, Hanoi is known as the Paris of Asia.  For me, I prefer Hanoi over Paris, if only for the cultural delights and friendly locals.

In direct contrast, our arrival at the airport is a somewhat sobering experience.  After all, the proper name for the country is the Socialist Republic of Vietnam.  The military dominates the atmosphere at the airport.  It is not a pleasant place, as far as airports are concerned.  Yet, this city of almost 3 million, Vietnam’s second largest city, is as welcoming as any city I have ever visited.  The largest city, Ho Chi Minh City (formerly Saigon), is over 1000 miles away.

Fast forwarding to modern Hanoi, the cityscape is changing with a huge construction boom.  But we are focused on the Old Quarter, basically the area around Hoan Kiem Lake, filled with the architecture, style, and culture of Old Hanoi.  Back in the day, each street had merchants and households focused on a specific trade or business.  Now the area is famous for its small artisans and merchants, including many silk traders and jewelers.  I remember buying a lacquered dish on my last trip here.  The Dong Xuan night market is open every weekend night with their clothing, souvenirs, and food.

Sidebar #1:  The fellow that helps Mike and I arrange our trips is quite an adventurer himself.  He actually walked the Ho Chi Minh Trail with a blind, former Vietcong Army General!  The trail is laced with land mines, according to what I know and read.  Depending on a blind man could be life and death.  In the end, yes, he made it safely!
This trip to the Hanoi portion of the trip is totally free wheeling, in other words, no English speaking guide or driver.  That probably means jumping on the back of a wild motorbike daredevil to navigate the crazy streets of Hanoi.  Cabs here just seem a little too predictable.
What will we do here?  One thing for sure is the great culinary delights.  A close second would be the cute, and interesting coffee culture that has grown from a traditional tea culture.  Third might be the more unusual artisans that populate old town Hanoi.
A little hiccup yesterday with my evisa for Nam.  So, we stayed an extra night in Bangkok.  I had to apply for another visa via an emergency services method that ended up costing me.  But the Qatar flight would not let anyone board without an approved evisa.  So, let’s hope today allows us to fly to Hanoi, to enjoy the culture and atmosphere that I have described. 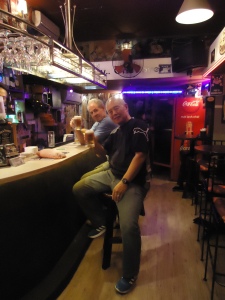 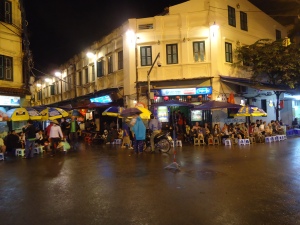