Posted by golfkat on October 12, 2015
Posted in: Cultures, Food, Travel. Leave a comment
The iconic national dish of Vietnam is pho, or rice noodles.  Pho noodle soup, with beef or chicken, seems to taste better in Hanoi than anywhere else in the world.  Pho is not pronounced “foe”, but with a short “u”, as in fuh. And you can be sure it is about the freshest meal you can find through not only Hanoi, but all over Vietnam.

The basic pho contain rice noodles, broth, herbs, and meat.  Some versions also contain fresh vegetables and condiments.  It is one of the most popular street foods, not only in Hanoi and Vietnam in general, it has likewise become quite popular here in the states.  And while northerners eat pho anytime of day, southern Vietnamese eat it only for breakfast, and only sometimes at lunch.

Pho has only been around since the early 20th century, and originated in the northern part of the country.  With the vast number of refugees now populating the world, pho has become a world wide phenomenon.  I have seen pho in such far off places at South Africa, Paris, France, Sydney, Australia, and Quito, Ecuador.  But one thing for sure, Hanoi and Saigon pho differ by noodle width, sweetness of broth, and the choice of herbs.

It was originally sold by roaming street vendors from dawn to dusk.  You have probably seen the photos of vendors walking around with the long pole resting on their shoulder, with a hot boiling pot at one end, and just about everything else on the other end.  It is a sight to behold.  Beef pho was introduced in 1930, and chicken pho was introduced later in 1939.  Meatless pho became popular in post war Vietnam, the so-called subsidy period, and the dish became known as “pilotless” pho.

Of course, after the war, the many Vietnamese refugees brought pho to other countries, to their “Little Saigons” in places like Los Angeles, Paris, and Vancouver.  It entered the U.S. mainstream in the 1990s as U.S. Vietnam relations improved.  Texas and California led the way.  It became the “go to” place for an inexpensive lunch or dinner, especially in the larger U.S. cities.  Conservative estimates say that pho restaurants generated half a billion dollars in annual revenue. 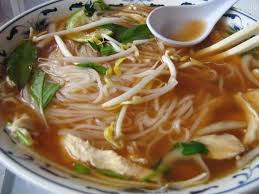 I can tell you that it is almost impossible to have a bad bowl of pho.  Once in a while, a small mistake can be made with over spicing the broth, or adding too many hot chilies.  The spices are often wrapped in cheesecloth and used over and over throughout the day.  These spices include ginger, clove, garlic, fennel, coriander, cinnamon, star anise, onion, and black cardamom.

Garnishes include lots of greens, herbs, and vegetables, most likely just picked earlier in the morning.  I guess they had the “farm to table” thing down before anyone else!  Add to that, dipping sauces, spicy pastes, lemon or lime juice, and the commonly used hoisin sauce.  Garnishes include green onions, white onions, Thai basil, Thai chili peppers, bean sprouts (my personal favorite), and cilantro (another favorite).

Regional variations exist, and I am sure some places and chefs take some pride in coming up with their own formulas.  Tofu, carrots, and broccoli are often added to vegetarian forms of pho.

This is probably more than you ever wanted to know about pho.  If you have never tried it, I highly encourage you to try it, sooner than later.  It is about as Vietnamese as you will ever see or taste.  and never is it any better than eating it while strolling the streets of Hanoi, on a somewhat windy and overcast day.  I took the easy way out and had a bowl for breakfast.

The weather here is much cooler than Bangkok, and quite pleasant.  I even wore denim jeans today!  We had a nice dinner at a little French place this evening, followed by some drinks at a typical Hanoi beer bar.  We leave early Monday morning for Halong Bay, a four hour drive north.  Sad to leave Hanoi, as we met so many nice people, even a British bloke married to a young Thai school teacher.  A former lawyer, now jiu jitsu expert, sounds like the famous Barry the V we met oh so many years ago in Santiago, Chile.