The Legend of Halong Bay

Posted by golfkat on October 12, 2015
Posted in: Action, Cultures, Travel. Leave a comment
This is the legend of Halong Bay:

The name Hạ Long is derived from the Sino Vietnamese , meaning “descending dragon”.

According to local legend, when Vietnamese had just started to develop into a country, they had to fight against invaders. To assist Vietnamese in defending their country, the gods sent a family of dragons as protectors. This family of dragons began spitting out jewels and jade. These jewels turned into the islands and islets dotting the bay, linking together to form a great wall against the invaders. Under magics, numerous rock mountains abruptly appeared on the sea, ahead of invaders” ships; the forward ships struck the rocks and each other. After winning the battle, the dragons were interested in peaceful sightseeing of the Earth, and then decided to live in this bay. The place where the mother dragon descended was named Hạ Long, the place where the dragon”s children attended upon their mother was called Bái Tử Long island (Bái: attend upon, Tử: children, Long: dragon), and the place where the dragon”s children wriggled their tails violently was called Bạch Long Vỹ island (Bạch: white-color of the foam made when Dragon”s children wriggled, Long: dragon, Vỹ: tail), present day Trà Cổ peninsula, Móng Cái.

Whether you believe any of this is entirely up to you.  I think it is just a beautiful place in the world.  Many of you might remember the nightly news reports during the late Sixties, and early Seventies, about the war here in Vietnam.  The Gulf of Tonkin was in the news just about every night.  What they did not tell us was that we were destroying one of the most beautiful and important places on earth!

A place with 1600 islands must be pretty, right?  And the limestone pillars (karsts) are equally impressive.  Most of the islands and pillars are quite precipitous, and uninhabited.  But beautiful and majestic nonetheless.  Way out here, 165 km from the capital of Hoi An, Quang Ninh province.   The variety of erosional features include caves and arches, creating a mature, and dramatic Karst landscape, or waterscape, as the case may be.

The limestones here in Halong Bay have eroded into fengcong (clusters of conical peaks), and fenglin (isolated tower features) karst features that have been modified by sea invasion.  The smaller islands are fenglin towers from 50 to 100 meters in height.  They have vertical walls on all sides, and continue to erode or evolve as rock falls, and large slab failures.
Marine invasion has created a notch cut into the entire rocky coastline.  These notches occur to limestone cliffs worldwide.  The resulting feature is the great number of lakes within the larger limestone islands.  Three main type of caves are another important part of Halong Bay:   Old phreatic caves are formed below the water table, old karstic foot caves formed by lateral undercutting of cliffs at the base, and marine notch caves formed at sea level where rock has eroded and reduced to a wave cut platform.
Perhaps as amazing as the place itself, is how well it has weathered a long history of human use.  But tourism, fisheries, and daily activity of the people living here requires strict control and regulation to minimize impact on this area.  Since 1962, there has been strict oversight by various government agencies.
It is a long, gruelling, sometimes interesting, sometimes sleep inducing drive to Halong Bay from Hanoi.  It was sad to leave Old Quarter Hanoi, a truly unique place in the world.  It is everything you could possibly package into a small area, except for a gas station or strip club!
See you there. 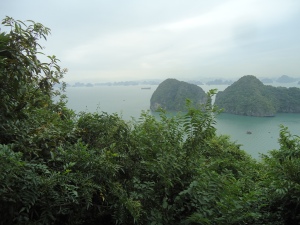 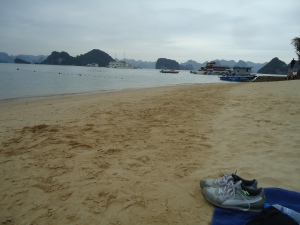