Posted by golfkat on October 16, 2015
Posted in: Cultures, Travel. Leave a comment

The Shwedagon Pagoda is one of the most famous pagodas in the world and it is certainly the main attraction of Yangon, Myanmar’s capital city. Locally known as Shwedagon Zedi Daw The, it sits atop of a hill and is 99 meters high. It can be seen from most places of Yangon day and night as the golden roof illuminates the city.  According to some, the pagoda is 2,600 years old, making Shwedagon the oldest pagoda in the world.  It sits atop Singuttara Hill, to the west of Kandawgyi Lake.

According to most religious experts, Shwedagon Pagoda is among the holiest sites in the land.  It is said to contain the relics of four previous Buddhas.  People come from far and near to worship here.  They say the pagoda is worth more than the Bank of England since it is covered in solid gold plates, not gold leaf.  And there are jewels near its apex.  The top of the stupa is encrusted with 4531 diamonds; the largest of which is a 72 carat diamond!

However, no official documents attesting its construction exist and its age is still a matter of debate.

The main gold-plated dome is topped by a stupa containing over 7,000 diamonds, rubies, topaz and sapphires, the whole giddy concoction offset by a massive emerald positioned to reflect the last rays of the setting sun.  There is little wonder that the Shwedagon is referred to in Myanmar as “The crown of Burma.” 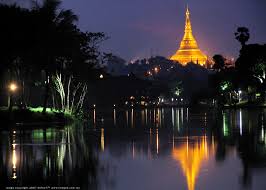 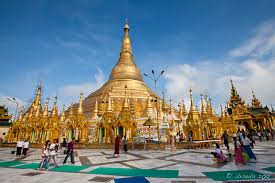 As Myanmar’s most revered shrine it has always been customary for families, mendicants and followers of the Buddha to make the pilgrimage to the Shwedagon in much the same way that Muslims feel compelled to visit the Kaaba at Mecca at least once in their lifetime.

Such is the potency of the Shwedagon that Burmese generally hold it to be indestructible. Despite a major earthquake in 1769, several smaller quakes in the 20th century and a major fire in 1931, it still stands imposingly on the top of a hill.  Visitors are required to remove their shoes upon entering the Shwedagon and negotiating the scalding floor tiles between the shaded sanctuaries is not an easy process.  Even when President Obama visited in 2012, the Secret Service did not want to take their shoes off.  But he insisted, so they broke an unequivocal rule and removed their shoes.

The pagoda is said to contain eight hairs of the Buddha, a fact that only adds to its prestige. The stairways and bridges leading into the main sanctuary serve the thousands of pilgrims who flock here, and flower and book stalls, peddlers of religious souvenirs and tea shops do a brisk trade during the Shwedagon’s long hours of opening.

“The Shwe Dagon,” wrote Somerset Maugham in 1930, “rose superb, glistening with gold, like a sudden hope in the dark night of the soul.”

Travelers will see temples everywhere they go in Myanmar, and will doubtless be struck by the wealth and profusion of building styles. At Pagan for example, there is an ancient plain containing over 2,000 temples and pagodas, surely one of the most remarkable ensembles in the world. Yet still, assessed on their individual merits, the Shwedagon Pagoda remains unrivaled as temple, meeting place and symbol of national identity.

The Burmese are Theravada Buddhists, who follow practices that originated in Hindu astrology.  Burmese astrology recognizes the seven planets of astrology, the Sun, Moon, Mercury, Venus, Mars, Jupiter and Saturn.  In addition, two others planets, Rahu and Ketu, though they differ from the Hindu version.  So, next time I say to someone that they must be from Ketu (the kings of all planets), the appropriate response is, “which one?”

Burmese Buddhists also need to know the day of the week they were born.  Eight planetary posts are marked by animals that represent the day.  The devotee places flowers, prayer flags, and pours water on the animal image, along with a prayer and a wish.  In addition, it is a Buddhist custom to circle the stupa in a clockwise fashion.

Leave it to the Portuguese to have plundered the stupa, in 1608 by explorer Philip de Brito e Nicote.  He stole the 300 ton bell to make cannons, but dropped it into the Bago River.  It has not been recovered.  Their incompetence was topped by the Brits who did the same thing in 1824.  The Second Anglo-Burmese War resulted in British occupation in 1852.  It remained this way for 77 years. The Brits exiled the King and Queen to India. The annexation and wars continued for many decades.

During WW2, the Japanese drove the Brits out of Burma, and declared it an independent country.  Then the Burmese switched sides due to the harsh treatment they received from the Japanese.  General Aung San emerged as the country’s natural leader.

In 1946, General Aung San demanded independence in a mass meeting at the stupa.  After elections that Aung San won by a huge majority, he was assassinated by a rival before he could take office.  In 1962, a military coup took over to lead the country into total nationalization.   Forty two years later, in 1988, his daughter, Aung San Suu Kyi addressed 500,000 people at the stupa demanding independence. In 2007, 20,000 monks and nuns marched on the Shwedagon Pagoda.  A series of demonstrations and clashes followed.  The constitution has been suspended from 1947 to 2007. 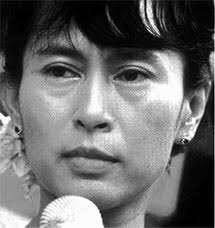 Aung San was arrested before elections took place, though her party, the National League for Democracy (NLD) won more than 85% of the vote.  The military junta did not allow the NLD to take office, and arrested many of the part leadership.  Aung San was awarded the Nobel Peace Prize in 1991, and released from house arrest in 1995.  She was arrested again 2000, and released in 2002.  In 2011, she left Rangoon for the first time.  And in May, 2012 she entered the lower house of the Burmese parliament as an elected representative.  Needless to say, much work remains to bring Burma into the Twenty First century.

We are not “temple” guys but Shwedagon is simply magnificent.  My hotel room faces the temple complex.   I just do not know what will happen after the next election.  But the people here are simply magnificently friendly and charming in every way, like Thailand on steroids.  I am so glad we came.