The Way to Mandalay

Posted by golfkat on October 17, 2015
Posted in: Cultures, Entertainment, Food, Travel. 2 Comments
Burma’s last royal capital was Mandalay, only 150 years old, and a short plane ride from Rangoon.  This city is quieter, and more laid back than Rangoon, on the banks of the famous Ayeyarwaddy River, 695 km north of the capital city.
So, fewer cars, but more squeaky bicycles and shoddy trishaws.  But, on the downside, even the palm trees are covered with dust.  Hardly a pretty place, Mandalay Hill is lined with Buddhas and spirit beings, also called nats.  Their famous stupa is called Mahamuni Paya.
But the highlight for me will be the famous Moustache Brothers Troupe.  They perform traditional Myanmar folk opera for the past 30 years.  They say the show is irreverent,  in your face, and cornball all at once.  The leader, Lu Maw, kneels over an old microphone stand, spewing jokes, slapstick, and political satire.  Bottom line, these actors are brave enough to work in a country where a joke can mean serious jail time.  At one time, they were arrested and sentenced to seven years hard labor, breaking rocks for roads and digging ditches.
They were finally releaesed in 2002 after support from big names like Rob Reiner and Bill Maher.  So, back on the streets, but always under the watchful eyes and video cameras of the military dictatorship.  Long story short, they have cleverly managed to do their show  as a demonstration show without costumes.  Lu Zaw has nicknamed Myanmar’s military intelligence as the “KGB.”  Par Par Lay is the famous Moustache Brother, but Lu Zaw is the only English speaker and a bundle of energy, as you can see on their U Tube videos.*
But Mandalay is also home to 60% of the country’s monks.  Yet, shopping here is the best in Myanmar.   Puppets and tapestries are world famous.  And the Burmese jade market is second to none.  But I want to see rubies!
So, what will we do here, besides eat and drink the cold, but watery Myanmar beer?  One easy solution is to find Tiger beer, so far the best we have had in three countries.  I also hope to find cooler weather with less humidity.  The locals keep saying their winter is just around the stupa.  I have been showering and getting laundry done at an exponential rate.
Believe it or not, the Burmese style of massage is superior to both Thai and Vietnamese versions.  How can anyone pass up an hour long massage for between $10 to $20 USD?
See you in Mandalay,  the city of almost a million people, not the huge casino on the strip in Vegas!
*I would skip the Moustache Brothers show, as it has become a sad reminder of Burma past. 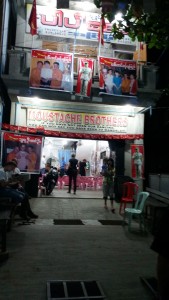 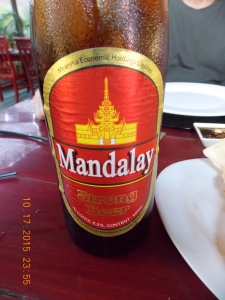 2 comments on “The Way to Mandalay”