Posted by golfkat on October 18, 2015
Posted in: Action, Cultures, Travel. Leave a comment
Most of you know that Burma, now Myanmar, is famous for its rich red rubies.  But a recent auction verified what we all know.  The ruby is the most desired stone after the diamond.  Read this (from SFGate and the AP):

A rare Burmese ruby in a platinum ring with diamonds sold for $30.3 million at auction, setting a world auction record for any ruby and for any stone by Cartier, according to Sotheby’s.

The buyer and history of the piece, with the ruby weighing in at 25.59 carats, was not disclosed. It was auctioned Tuesday as part of the annual Magnificent and Noble Jewels sale by Sotheby’s Geneva.

The price of the cushion-shaped “Sunrise Ruby” had been estimated prior to the sale at $12 million to $18 million. It is known for its “pigeon blood” red color and set between heptagon-shaped diamonds weighing 2.47 and 2.70 carats. The piece is signed Cartier.

The auction house called a natural ruby from Burma of this size and color extremely rare. The ring broke an auction record for any ruby per carat. 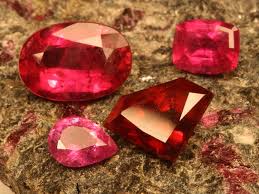 I may look around, though I hear rubies can legally be purchased at government sponsored places ONLY.  Rubies can fetch the highest per carat price of any colored stone.  The purest ruby is colorless, with the red color imparted by the trace element, Chromium.  Ruby is also the birthstone for July.  Back in 2012, a 6 carat ruby sold for $661,000 per carat!  Pigeon blood is the descriptive term for the reddest ruby.

Rubies have been found in Burma since 600AD.  Warriors possessed rubies to make them invincible in battle, even embedding them into their flesh.  Burma’s Mogok Stone Tract is known as the Valley of Rubies.  Mogok has been off limits until 2013, allowing GIA gemologists their first visit in a decade.

Mogok mining operations
The color of the Burmese ruby is said to be the most vivid.  Originally, these rubies were not suitable for jewelry, since the crystals displayed two colors:  a purple to black core, and a bright red periphery.  But the dark core could be turned into deep red by means of heat treatment.  These heat-treated rubies vary in size from 0.5 to 3 carats.  Rubies can also be found in nearby Vietnam, as well as Thailand.  Ceylon rubies have been coveted for their light red, raspberry like color.
Color remains the rubies most important characteristic, with transparency secondary.  The cut is important, as only a perfect cut will underscore the beauty of the stone.  That said, a perfect ruby is difficult to find.  Please do not count on me to find one, much less buy one.
They say Mandalay is the place to buy rubies and jade.  So far, nobody has tried to wear us down with promises of the richest, reddest, and most sparkling rubies, other than Tom Shane back on the local SF Bay area radio stations.
Fortunately, my dear friend Sian was busy and had to forego her big ruby.  They also have a huge jade market here, catering to both the Chinese and Indians. We both set our sights a little lower, with the traditional puppets on sale everywhere.
We made it to a great local barbecue place this evening.  Everything on skewers, except the Tiger beer.  We were the only tourists there.  Iimagine most of you would not feel comfortable there, but it was just fine.  We had many items, including:  squid, tofu, pork, gai lan, fish tofu, chicken, and corn.
On a sad note, we have officially bottomed out on temple and palace visits. They all look the same now.  Our next stop, Inle Lake better not have any, or we will both fake illness and get drunk by the pool.  The people here are sp proud of their culture and monarchy.  They show no ill effects fromthe military regime that we can see. Both big and small entrepreneurial endeavors are thriving beyond our pre conceived notions.  Burma, or rather Myanmar seems to be moving forward with great enthusiasm, and spirit.  I applaud them.
Enough for now, time to pack and ready for early wake up call, and car service to airport.  See you at Inle Lake.