Burma Facts and Some Mandalay

Posted by golfkat on October 19, 2015
Posted in: Action, Cultures, Entertainment, Food, Travel. Leave a comment
I did not realize Burma is the second largest country in SE Asia, after Indonesia.  It is roughly the size of Texas, which surprises me.  The southeastern border is Thailand, and the northeastern border is China, with whom they are quite cozy.  They also have borders next to Laos, India, and Bangladesh.  And fully a third of the country has mostly beautiful coastline, along the Andaman Sea and the Bay of Bengal.  This extends well over 1200 miles.

Compared to Thailand, the coastline is undeveloped.  The mighty Himalayas run from north to south.  Three rivers are divided by the mountain ranges.  The longest river is the Irrawaddy, which runs 1348 miles.  The other two, which run into the “Waddy” are the N’mai, and the Mali Rivers.  They empty into the Irrawaddy Delta, and then into the Andaman Sea.  And of course, it was the famous Rudyard Kipling who referred to the river as “The Road to Mandalay”.

The river is naturally, the lifeblood of the river delta, and has been since the sixth century.  Even the Brits used it when they colonized Burma.  Rice is the main product grown here, irrigated by water from the Irrawaddy.  Unfortunately, the military dictatorship signed a deal, probably with the Chinese, to build seven hydroelectric dams in 2007.

You dare ask, why China?  Well, Myanmar is rich in jade, and gems (rubies are the best in the world), oil, and natural gas.  Sadly, the income gap here is the widest in the world, thanks to the military dictatorship. They just discovered a huge mountainof copper, as well.

This is the last stop on our three country jaunt in SE Asia.  I hope it will be the highlight.
And I would say it is.  We had the perfect guide and driver.  We got out to the local areas, toured on a trishaw, had an authentic Burmese luncheon, with cold beer.  Let’s just say we tipped our guide quite well.  She is building a B&B with her husband.  We will stay there on our next visit.
We are not temple or pagoda guys, but Shwedagon was simply magnificent.  Definitely on a par with Angkor and Macchu.  And far superior to the Vatican, Westminster, or Notre Dame.
Tonight is a relaxing massage, followed by happy hour and appetizers that resemble a meal.  Who knows after that?
Actually, we went to a bar across the street after happy hour in the club lounge.  The food was so good and plentiful, we decided to skip dinner.  The bar was only a coffee and beer joint, and we were totally overdosed on beer.  We needed a nice, crisp Riesling to cap off the day.  No such luck here in Rangoon.
The hotel bar was sadly filled with tourists and some out of order Chinese on a junket, I presume.  They were embarrassing to the Asian culture in my opinion.   I have seen drunk rabbis behave better.  We left without finishing our beer and called a night.
We spent a long day in transit, from Rengoon to Mandalay,  with the 2 hour wait before the flight,  and an hour to our hotel here.  A total waste of a day, and quite tiring.
We did manage some beer and French fries in the hotel bar, before heading out into the wilderness.  We found a cute bistro, if such an animal exists here.  We were the only customers inthe place,  with at least 12 wait staff and assorted hangers on.  The meal was beyong our expectation, with a fried fish with tamarind sauce, and a side of fresh veggies, and steamed rice.  We got lucky, I think.
After dinner was a total disaster, as we ended up at the famous Moustache Brothers show at their home.  Sold to us a political satire and irreverent monologue, it was mostly some Burmese folk dancing and silly sign holding for some laughs.  The highlight was the 5 year old granddaughter,  dancing, and answering some silly questions.
It was not what I expected.  I hope Sunday will be better.  Well, let me see.
First, Mr. Mike got penalized for his dalliance with some chocolate ice cream last night.  I abstained, and so thankful.  He stayed back this morning,  while I did a little touring.  The stops, on particular order or enjoyment were:  gold leaf making, marble statue carving, silk weaving, a walk on the famous teak bridge, and a jaunt up to famous Mandalay Hill.  We also stopped at the two holiest temples, and paid a dollar each to take photos.  I guess even the devout Buddhists here know capitalism.
Lunch was better, as Mike felt better, and I was running out of monosyllabic conversation with my guide.  But a jolly little chap, kind, and eager to learn more English.  We are now at the traditional hot and humid weather timeout, a mid day break to cool off and recharge.  Oh, it is humid here, on top of typical warm weather.  Summer is on its way, I am told.
It is Sunday after all, but seems like any other day.  We are heading out to the Royal Palace, destroyed by the Brits, of course.  Slowly, being rebuilt, but I am sure not as grand.  Then, the highlight, I hope, the local open air market.  Fake Gucci, anyone?? 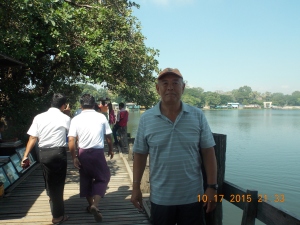