Posted by golfkat on September 23, 2016
Posted in: Action, Cultures, Entertainment, Food, National Parks, Travel. Leave a comment
So, I have crossed our great country twice now on the rails.  My first trip, the California Zephyr, began in Chicago, and ended in the Bay Area.  My second trip, to the last Niners Super Bowl in New Orleans was the Sunset Limited, from Los Angeles to New Orleans.

And I hear the Giants are in town.  And I have never been to a Giants game at Wrigley.  You think I might find my way to Wrigley Field on Thursday and Friday?? I have been to Wrigley, numerous times, but I digress.  Back to Amtrak and the Empire Builder.

This is the route and areas served:

How did the Empire Builder get its name?  The Great Northern Railway’s founder, James Hill was known as “The Empire Builder”.  On June 11, 1929, he inaugurated service that cut the 2,211 mile route from 58.5 hours to 45 hours.  He reorganized several failed railroads into this transcontinental service. 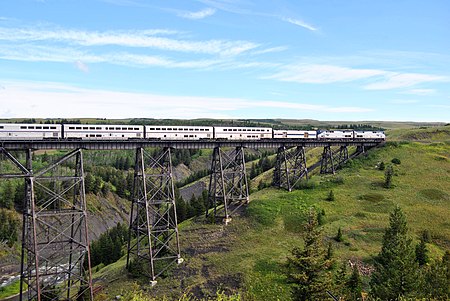 In 1970, the Great Northern merged with other railways to form Burlington Northern Railroad.  Only a year later, Amtrak assumed operation of the route, and shifted the Chicago to St. Paul leg to the Milwaukee Road route through Milwaukee on the route to St. Paul.

The Portland section of this route was removed between 1971 and 1981.  In 2005, Amtrak upgraded service to include a wine and cheese tasting in the dining car for sleeping-car passengers and free newspapers in the morning.  The tradition continues, either formally or informally, based on my previous trips.

But the Empire Builder remains the most popular long distance route on Amtrak.  About 65% of the cost of operation is covered by fare paying customers.

Among the highlights:  After three short stops near Glacier National Park—(East Glacier Park [summer only] or Browning [winter only]); Essex [a flag stop]; and West Glacier Park)– it makes a longer stop in Whitefish, Montana before entering the Northern Plains of eastern Montana and North Dakota. The land changes from prairie to forest as it travels through Minnesota. From Saint Paul Union Depot, the train crosses the Mississippi River at Hastings, Minnesota and passes through southeastern Minnesota cities on or near Lake Pepin before crossing the Mississippi again at La Crosse, Wisconsin. It winds through rural southern Wisconsin, turns south at Milwaukee, and ends at Chicago Union Station.

The Empire Builder uses Amtrak’s double deck Superliner equipment.  In fact, it was the first train to be  equipped with Superliners, October 28, 1979.  Typical service includes:

They say these three transcontinental routes offer a window into America.  While some views, and landmarks are interesting, there are long periods of “nothing”.  Much of the land in not inhabited.  This barren land reminds me of my trip on the Trans Siberian Railway, across all of Russia, and nine time zones, or 5,772 miles (one third of the earth’s surface).  This trip is a mere three time zones (2,211 miles).

It completes my trifecta across this great country of ours.  Maybe I will try the Canadian Pacific across the Canadian Rockies next?  Better yet, combine it with a bicycle trip, or the Calgary Stampede.