Posted by golfkat on October 15, 2016
Posted in: Action, Cultures, Entertainment, Food, Travel. Leave a comment
Not really, it is famous Templebar in downtown Dublin.  In fact, the area is called Temple Bar, an area on the south bank of the Liffey River in central Dublin, Ireland.  It is promoted as Dublin’s cultural center, with a nightlife enjoyed by tourists like me.  The most popular places are the Temple Bar Pub itself, along with The Palace Bar, Oliver St. John Gogarty’s, and The Auld Dubliner.
Originally, the area was St. Andrews Parish.  Legend has it that Temple Bar Street got its name from Sir William Temple of Trinity College.  His home and garden were located there in the 17th century.  However, the name may also be derived from the famous district in London of the same name.  Maybe they played the copy cat game instead of honoring poor Sir William.
The first performance of Handel’s Messiah was performed on Fishamble Street, near Temple Bar.  Later in the 18th century, it was the center of prostitution in Dublin.  It went downhill from there in the 19th and 20th centuries, as it suffered from urban decay.  Finally, s state owned transport company planned to buy the property and build a bus terminal.
While that was in the planning stages, the purchased buildings were let out at low rents, which attracted small shops, artists and galleries to the area.  Protesters were successful in stopping the project, funding was secured, and the not for profit company called Temple Bar Properties oversaw the regeneration of the area as Dublin’s cultural center.
From their website:  The area is the location of many Irish cultural institutions, including the Irish Photography Centre (incorporating the Dublin Institute of Photography, the National Photographic Archive and the Gallery of Photography), the Ark Children’s Cultural Centre, the Irish Film Institute, incorporating the Irish Film Archive, the Button Factory, the Arthouse Multimedia Centre, Temple Bar Gallery and Studios, the Project Arts Centre, the Gaiety School of Acting, IBAT College Dublin, as well as the Irish Stock Exchange and the Central Bank of Ireland. 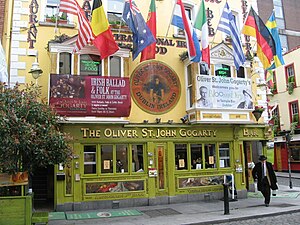 After dark, the area is a major centre for nightlife, with many tourist-focused nightclubs, restaurants and bars. Pubs in the area include The Temple Bar Pub, The Porterhouse, the Oliver St. John Gogarty, the Turk’s Head, Czech Inn (in the former Isolde’s Tower), the Quays Bar, the Foggy Dew, The Auld Dubliner and Bad Bobs.  And I plan to check it out!

According to local, Emily Carson:

Temple Bar is renowned for lairy hen parties and wild stag dos but there are plenty of nice watering holes where you can grab a drink without becoming part of nearby celebrations. For some great, locally-brewed beers head to The Porterhouse, a multi-storey pub with some interesting beers on offer. If you’re looking to grab a drink near Temple Bar Square you can head to the Oliver St. John Gogarty – a favourite with tourists – or nearby Teac na Céibe. For those looking for something slightly more upmarket why not try your luck at the Vintage Cocktail Club, a mysterious black door that leads to a plethora of high end and delicious drinks.

Whiskey lovers should take to the quays and get a dram at the Bison Bar or around the corner at tourist haunt The Temple Bar – which boasts over 450 types of whiskey. If you want to watch the world go by with some good quality cocktails and vintage cartoons on the tv then a short stroll will bring you to Garage Bar. Other nearby drinks establishments worth visiting include gay-friendly bar The Front Lounge, The Turk’s Head next door and the IFI Bar for more relaxed glasses of wine before maybe taking in a show.

I had my first glass of Guinness for today at Templebar.  These Irish know how to party.