Posted by golfkat on December 20, 2016
Posted in: Action, Cultures, Travel. Leave a comment

This place is called the Calico Man Early Site, just outside the town of Barstow.  I have personally, never seen the sign.  But with the educated and able guidance of relatives from Ohio, we plan to stop there.  The bottom line is the site of a unique and globally important archeological site.  Presumably, tool-using humans settled near an ancient lake about 30,000 years ago.  I say presumably because some experts think it is a hoax, or the last gasp of a fading archeologist, who may or may not have misinterpreted some loose gravel, scree, and rocks.

If this is a true archeological site, it is one of the most important and overlooked sites in North America.  The man behind this, Louis Leakey, was also the co-discoverer of the world’s oldest hominid fossils in East Africa’s Olduvai Gorge.  Cynics say it was a last gasp attempt to recapture the fame and fortune of fading and forgotten man of science.  Perhaps the term “leakey” tire came form him?

Hippity hopping to the scene was an excavator, Ruth “Dee Simpson, no relation to Homer, who relayed stories of sharpened rock blades and artificially enhanced stones in the ruble and sand of the site.  With collectors rampantly taking semi-precious stones form the area, the urgency to set up an official dig site increased.  The remnants of these ancient settlers needed to be catalogued, and saved if possible.

Leakey, in his imminent haste, jumped in to help Simpson, and vouch for the authenticity of the site.    If the site was real, it would change our understanding of how and when our continent was initially populated. The actual Calico Early Man Site meanders north from the freeway not far from Barstow.  The premise is based on an humongous lake that covered the area during the Ice Age.  Rich in wildlife, the shoreline was soon inhabited by humans.  They left behind their tools, mostly shaped stone blades, which have been collected over the years by prospectors and treasure hunters.

However, the corollary also exists, that the gravel is just mistaken for ancient tools.  Are they rocks or human instruments?

“In fact, this is the dominant interpretation of this much-disputed desert site—which is that these remote and dusty landscapes are just gravel mistaken for tools. It’s just a bunch of rocks.”

“There is nothing at all to see here, in other words, except some unremarkable stones, accidentally chipped and weathered over tens of thousands of years to resemble prehistoric human-made scrapers and blades. So is this geology or is it technology? Are these natural objects or are they artificial tools? This weird interpretive dilemma is central to the Calico Early Man Site.”

The Calico Man Site happens to sit between two of the largest and many say “outrageous” settlements known to mankind, the glitzy and glamorous Las Vegas and the sprawling, smog choked metropolis of Los Angeles.  You can read more about it yourself.  I am not sure what to make of it. 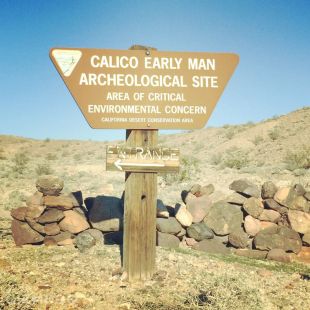