Posted by golfkat on May 4, 2017
Posted in: Action, Cultures, Entertainment, National Parks, Travel. Leave a comment

Going to the desert always conjures up images of a much younger Ronald Reagan on the Twenty Mule Team, or an old sour dough looking for gold, but realizing he needs water just as much.  I have been the driest desert in the world, the Atacama Desert in Chile.  And I have been to the Sonoran Desert (AZ), Mojave and Death Valley before as well.  Palm Springs and Palm Desert don’t really count, but they are just like Los Angeles, but with cactus and cheap motels.

The Mojave has the highest absolute temperature on record in the U.S. at 134 degrees F. at Furnace Creek.  Total rainfall yearly is 2.36 inches.  Contrast that to Death Valley, with only 2 inches of annual rainfall.   The Atacama in Chile, often compared to Mars, is the oldest and driest desert in the world.  Although located at 8,000 feet above sea level, temperatures reach a high of only 104 degrees F, with a rainfall of .004 inches per year!  We were there last, in 2009, albeit in December, when snow actually fell!!!

The Manzanar War Relocation Center is perhaps the best preserved on the ten Relocation Centers due to the extreme heat of the desert.  Death Valley NP is the hottest, lowest and driest of all our national parks.  As kids, we best knew Death Valley for the movies and TV shows, like Death Valley Days, Return of the Jedi, Spartacus and Star Wars.

Mojave Desert is the driest desert in North America, yet supports about 2000 species of plant life and at least 43 species of animal life.  Often referred to as the “high desert”, Mojave encompasses Death Valley, Red Rock Canyon in Las Vegas, Joshua Tree NP, Lake Meade, and Antelope Valley, among other areas.

Here are some other possible stops in the desert:

4.  East Jesus Art, anyone can contribute art at this place near Salvation Mountain.

5.  Salvation Mountain and Abandoned Water Tank Murals, a monument to love, faith and lots of paint.

6.  World’s Largest Banana Museum, according to Guinness, and home to the banana soda.

7.  Cabazon Dinosaur, home to that American of all institutions, a tourist trap gift shop!

9.  Salton Sea, largest lake in California, with a summer tilapia die out due to lack of oxygen in the water.

10.  Desert Sculptures of Anza-Borrego, of course, meant to attract tourists, that’s why we go!!!

11.  Slab City, a largely snowbird, renegade, unregulated, off the grid collection of almost anything.  Site of the 2007 movie, “Into the Wild” and complete with its own Salvation Mountain, and East Jesus.

So, never let it be said that the desert does not offer enough to do.  And notice the strange but definite correlation to religion and tourism?  It must be the dry heat?

What else can I tell you?

2.  The Mojave Desert has two rivers, the famous Colorado River, and the Mojave River runs underground throughout the area.

4.  The Mojave Desert covers 22,000 square miles.  The region has salt flats in the center.  Windy days are common.

6.  Today over 1 million people live in the Mojave, and 40 million live within a day’s drive of the desert. Borax, potash and salt are extracted from the central salt flats. Silver, tungsten, gold and iron are mined. Alfalfa is farmed using irrigation from the underground Mojave River. Tourism is also an important industry in the region.

7.  On July 10, 1913, the Furnace Creek in Death Valley recorded a temperature of 134°F, which officially makes it the hottest place in the world. (since surpassed by Libya).

8.  The sand dunes of the Kelso Dune Field are also famous for the phenomenon known as singing or booming dunes, wherein sand produces a distinct sound when wind passes over it.

9.  The Joshua tree (Yucca brevifolia) is only found in the Mojave Desert and surrounding areas, and is yet another fact that not many people are aware of. This species is mostly found at an elevation of between 1,300 and 5,900 ft.

10.  Many desert-dwelling animals have special adaptations for living in their harsh habitat.  Desert bighorn sheep, for example, can go for weeks without water and bounce back quickly from dehydration.

11.  A large percentage of the lands in the region are under federal ownership and managed by the Bureau of Land Management, National Park Service and Department of Defense. Ash Meadows, including Devil’s Hole, located in southern Nevada, supports 24 endemic species, all of which are federally listed as Endangered or Threatened under the Endangered Species Act.

12.  Military installations were established in the Mojave during World War II; Edwards Air Force Base is perhaps the best known. Northwest of Edwards, on the western edge of the desert, is Mojave Air and Space Port, a civilian test facility and aircraft storage center. Further north and northeast is the U.S. Navy’s China Lake weapons testing facility, which is also the site of the Coso Petroglyphs, the largest collection of ancient rock art in the Americas.

13.  More than one third of the earth’s land surface is covered by near-deserts or true deserts.

14.  Some desert plants are “nocturnal”. Their flowers bloom at night instead of during the day to attract pollinators that sleep while the sun shines.

15.  Mobius Arch in the Alabama Hills.  Reminds me of the arches in Arches NP, Utah.

16.  Alabama Hills Road Tour (self guided).  Since the early 1920s, movie stars such as Tom Mix, Hopalong Cassidy, Gene Autry and the Lone Ranger, have been shooting it out with outlaws. Classics such as Gunga Din, Springfield Rifle, and How the West was Won, were filmed at sites now known as “Movie Flats” and at Movie Flat Road. During 1993 portions were filmed with Mel Gibson for Maverick , released in 1994. A massive set was built in the Alabama’s formations and filming continued for three weeks. Portions of scenes for the movie The Shadow were filmed during 1993, starring Alec Baldwin. Some movies filmed more recently have been GI Jane, Star Trek Generations and Disney’s Dinosaur.

I have probably bored you more than enough for now.  I strongly suggest you make this a stop on your way to Vegas, Palm Springs or Scottsdale. 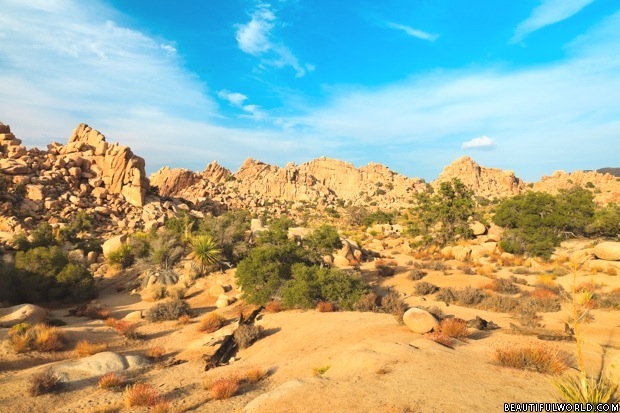