Posted by golfkat on May 4, 2017
Posted in: Action, Cultures, Food, Health, Sports, Travel. Leave a comment
My grandparents, both maternal and paternal, were sent to relocation camps in Arizona. None of my family were in Manzanar, but rather Poston and Gila, Arizona, as well as Jerome, Arkansas camps.  My parents actually met at Gila River, and got a weekend pass to get married in Phoenix.  But the path along Highway 395 leads to Manzanar.

The sprawling desert site was the first of 10 camps used by the U.S. military to confine Japanese Americans and their families during World War II. A marker near the entrance says, “May the injustice and humiliation suffered here as a result of hysteria, racism, and economic exploitation never emerge again.” The visitor center has 8,000 square feet given over to exhibits and offers an outstanding 22-minute film called “Remembering Manzanar.”

It turns out that, among many reasons, President Roosevelt ordered the internment of the west coast Japanese to ensure his re-election in 1944 against Thomas Dewey.  Shortly after his re-election, he authorized the closure of the camps.  Then Governor Earl Warren of California went along with this, and lived to regret his major role in the evacuation and Relocation.
I have been reading and researching a great deal about the Relocation, in books, on You Tube, and from stories from my relatives who were incarcerated there.  Most of the time, there is a story, vignette, or anecdote that brings tears to my eyes.  I cannot ever imagine how it felt to go through this.  But with the recent hysteria over Muslim immigrants, I understand how and why it happened.
I am not sure how I will feel when I set foot on the grounds.  I will try to imagine my family seeing this lonely and deserted place.  Nobody lived here prior to their arrival, and nobody has lived here since.  This applies to all of the ten Relocation camps.  And what about the people in the nearby towns who suddenly had thousands of “enemy aliens” and American citizens of Japanese ancestry living nearby?
The stories are upsetting, gut-wrenching, and tear producing.  Can you imagine using the latrine with no privacy walls or doors?  In fact, the showers had no doors either.  I imagine young teenage boys having a field day watching their female classmates take a shower!!!
Living in the dust storms of Manzanar in tar paper barracks must have been demeaning.  Winter temperatures reaching freezing or below must have been equally challenging.  Eating in mess halls eroded the family unit.  Hearing your neighbors constantly was dehumanizing.  And seeing guns pointed inward, rather than outward for protection from the rage and aftermath of Pearl Harbor by US citizens must have been perplexing.
Losing everything, or having to sell new cars for $10 must have been depressing and appalling.  Not knowing where some  heads of family were imprisoned must have been consuming.  Some were imprisoned for the duration of the war, and were never charged with any crime.  Many could not bear going back to their homes after the camps were closed.  How many died of a broken heart?
When their sons enlisted in the military to fight in the war, our grandparents must have been terribly upset and confused.  Why would their sons fight to protect a country that placed them in prison camps in the middle of the desert or swamp?  When they were notified of their deaths, how did they feel about their newly adopted home land?
When they came back, some returned to their homes and farms, like my grandparents.  But some could not find a place to rent or buy, nor find a job.  Former Senator Daniel Inouye of Hawaii, upon returning from fighting the war in Europe, having lost an arm, could not get a haircut in Seattle!  Some would not even be allowed to go through high school graduation with their class!  As late as the mid to late Fifties, I could not get a haircut in the town of Kingsburg!  We had to drive to the nearby town of Selma, and get a haircut from a Hispanic barber.
So yes, when I see someone wearing a turban or birka, I give pause.  Then I realize that might as well be my grandmother or grandfather in the late 1800’s.  Maybe we were misunderstood, looked upon as foreign or strange, ate different food, dressed differently, worshipped differently.
But the war forced us to assimilate.  We no longer had Japanese first or middle names.  We wore the same clothes as everybody else.  We ate the same food in our sack lunches from home.  We joined the same Scout troops and athletic teams.  We began to be accepted on our own merit.
Yes, I have digressed from my visit.  But this is what I think about.  I am thankful that my grandparents made their way here, and established their homes and families in California.  And to my parents for making a great childhood for us.  I thank them every day that I am an American.  But I cannot ever forget what this country did to them, and could, of course, do again to a new group.
Personal observation:  I think they portrayed everything here at Manzanar a little too nice!!  They made it look like summer camp, and lots of kumbaya.  But I did find my dear Long Beach Aunt’s family, and more information on my parents from the ranger on duty.  And yes, the wind blows almost all the time. 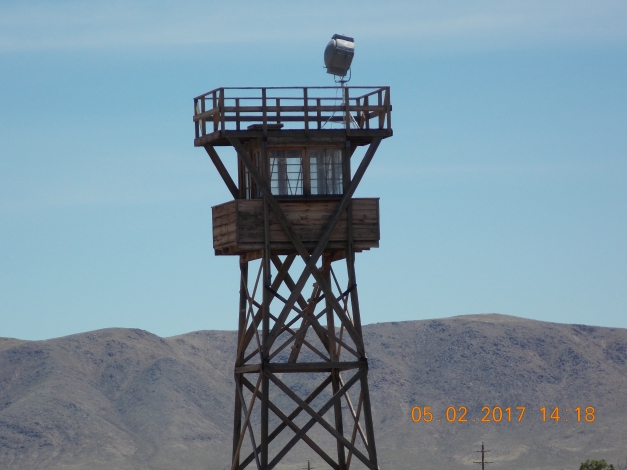 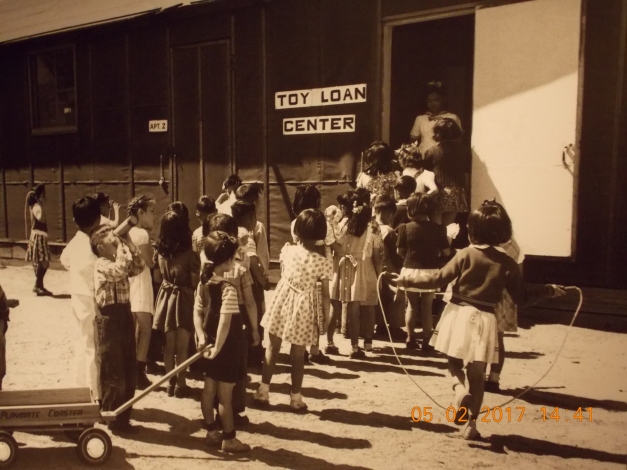