Why airplane food taste so bad

Airplane food has a bad reputation, but the food itself isn’t entirely to blame—the real fault lies with the plane. A 2015 Cornell University study, reported by Time, found that the environment inside an airplane actually alters the way food and drink tastes—sweet items tasted less sweet, while salty flavors were heightened. The dry recycled air inside the plane cabin doesn’t help either as low humidity can further dull taste and smell making everything in a plane seem bland. According to a 2010 study from the Fraunhofer Institute for Building Physics in Germany, it’s about 30 percent more difficult to detect sweet and salty tastes when you’re up in the air. Next time you fly, skip the meal, and maybe try a glass of tomato juice instead.

Do you remember when I told you that United and some of the big American airlines in the 1970s had full buffets and soft serve ice cream on their trans continental flights?  Now, I don’t know about you, but I would pay extra for a decent meal on my airline trips longer than 3 hours.  I did that on my last flight to Europe, on budget airlines, Aer Lingus.  The meals were as good as first class!
Can you believe a guy named Nikos Loukas, runs a website called inflightfeed.com?  He flies over 180,000 km a year to “feed” his website.  In fairness, he highlights both the good and the bad meals.  He said the worst meal was some sort of airline mystery meat** on Ukraine International that cost 9 Euros.
His favorite meals?  Either the lobster thermidor or the Kyo-kaiseki  Japanese dinner on Singapore Airlines in first class.  Having flown Singapore twice, I would agree!

The BBC says:  Although planes routinely cruise at altitudes of around 40,000 feet, the pressure of the cabin is brought back down to more comfortable altitudes of between six and nine thousand feet above sea level. Even those lowered altitudes, though, are still enough to slow down cook times considerably. 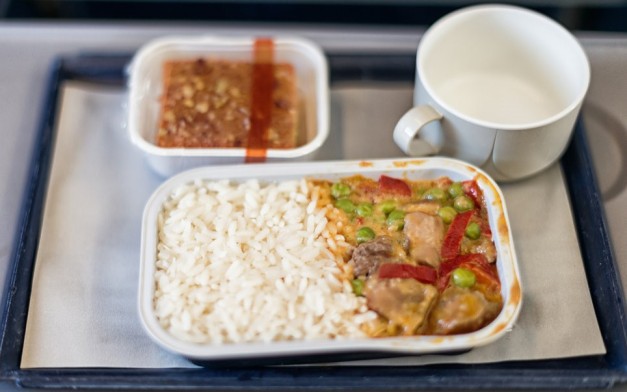 , who directs the International Center for Air Transportation at the Massachusetts Institute of Technology. “They generally are just doing reheating.”

It’s not just the difficulties of cooking, though. Even the food service encourages heat-and-serve style meals. The preference in hot airline meals is for precut, reheated meats, usually swimming in sauce, like boeuf bourguignon. In part, the sauce works to counteract the dryness of the pressurized air cabin. But both the sauce and the slow reheat time also suit today’s blunt-edged airline cutlery sets, which have either no knife or an unsharpened one.

There are a few tricks to getting a decent meal, even in coach.  First, check if the airline offers “special meals” in coach, like kosher, low salt, vegetarian, low cholesterol or Asian.  These generally require better preparation methods, and are served cold.  Second, many airlines are now offering upgraded meals, ordered ahead of time, and provided at a reasonable cost.  Third, you always have the option to buy food before boarding or even getting to the airport.  We always buy food at our favorite French bakery in Seattle for our flight home.

Thanks to the Samurai School of Discount Travel, you now know the secrets of the veteran traveler and survivor.

**mystery meat=the first time I heard this term was back in 1964, when I was a freshman at UC Berkeley.  The guys in my dorm called anything that either tasted bad or  we could not adequately identify, by the now ubiquitous term, mystery meat!