Garden of the Gods

Long considered the most magical stop in Colorado, the Garden of the Gods in Colorado Springs is a National Natural Landmark since 1971.  Though I have been to the Springs numerous times, I have only seen the Garden at dusk, and in a heavy Colorado rain storm.  I am hoping today will be a little better.  It is one of Colorado’s most popular and FREE attractions.

From the Visit Colorado website:  Imagine dramatic views, 300′ towering sandstone rock formations against a backdrop of snow-capped Pikes Peak and brilliant blue skies. This world class Visitor & Nature Center is the most visited attraction in the region with an exciting, NEW, HD show: “How Did Those Red Rocks Get There?” shown in the Geo-Trekker Theater. Delight in one of Colorado’s most photographed views while eating in our glassed in café 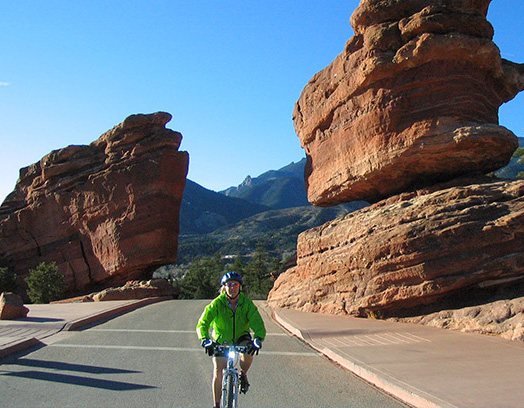 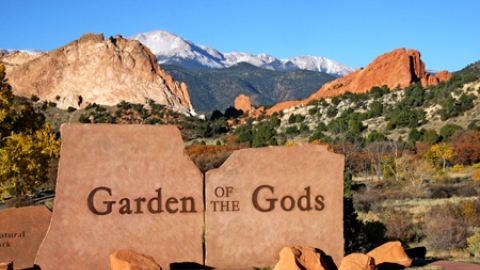 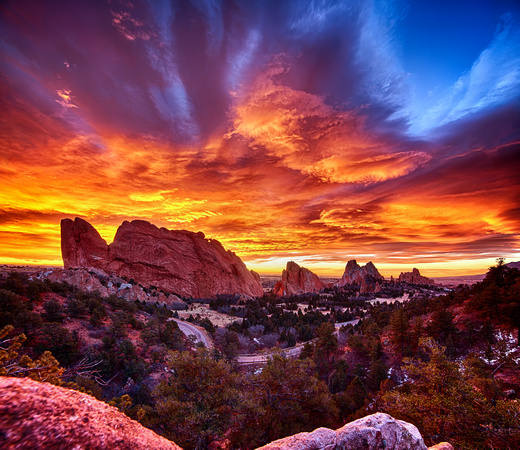 or from our terrace overlooking Pikes Peak and Garden of the Gods. Where else can you eat inside a postcard? Pick up your FREE park map, guided walks, nature talks, bird watching, hiking. Dynamic New Interactive Museum Exhibits  Now Open! FREE NATURE CENTER.

From the Garden of the Gods website:  By the 1870’s, the railroads had forged their way west. In 1871, General William Jackson Palmer founded Colorado Springs while extending the lines of his Denver and Rio Grande Railroad. In 1879, General Palmer repeatedly urged his friend, Charles Elliott Perkins, the head of the Burlington Railroad, to establish a home in the Garden of the Gods and to build his railroad from Chicago to Colorado Springs. Although the Burlington never reached Colorado Springs directly, Perkins did purchase two-hundred and forty acres in the Garden of the Gods for a summer home in 1879. He later added to the property but never built on it, preferring to leave his wonderland in its natural state for the enjoyment of the public. Perkins died in 1907 before he made arrangements for the land to become a public park, although it had been open to the public for years. In 1909, Perkins’ children, knowing their father’s feeling for the Garden of the Gods, conveyed his four-hundred eighty acres to the City of Colorado Springs. It would be known forever as the Garden of the Gods “where it shall remain free to the public, where no intoxicating liquors shall be manufactured, sold, or dispensed, where no building or structure shall be erected except those necessary to properly care for, protect, and maintain the area as a public park.”

And this is how the name began:  “It was August of 1859 when two surveyors started out from Denver City to begin a townsite, soon to be called Colorado City. While exploring nearby locations, they came upon a beautiful area of sandstone formations. M. S. Beach, who related this incident, suggested that it would be a “capital place for a beer garden” when the country grew up. His companion, Rufus Cable, a “young and poetic man”, exclaimed, “Beer Garden! Why it is a fit place for the Gods to assemble. We will call it the Garden of the Gods.” It has been so called ever since.”
The best news of all, all one way roads in the park have paved bike lanes.  And mountain biking is allowed on designated mountain trails.  In addition, there are 15 miles of hiking trails in the park.  In addition, rock climbing, photography, jeep and Segway tours, picnic grounds,  guided walks, and nature talks are available.  GOG is a National Natural Landmark, a public park attracting all types of visitors.
My old high school friend, Gary, spent many  of his childhood summers here with is family.  They stayed in a castle, and hiked many of the trails here.  Lucky kid!!!!
Perhaps it is best to just show you a few photos, and hope that you will stop by the next time you head south out of Denver.  There does seem to be some other worldly spirituality about this place.  And now that I can see it clearly, it is simply a magnificent place on our earth!