Best Beer in the World?

Posted by golfkat on October 21, 2017
Posted in: Cultures, Food, Travel. Leave a comment

The Czech Republic has the highest per capita beer consumption in the world.  More than a college campus of homecoming weekend.  That amount is 160 liters per year, while the US languishes at 76 liters.  That is one bottle of beer per day for every man, woman, and child!!!!  But be careful, as beer can come anywhere from 6% to 19%, as determined by the amount of malt extract used in the brewing process.

The beer of choice here is a pale lager of the pilsner type, with a typical transparent golden color, light flavor and lots of foam.  Sounds, looks, and taste similar to ours in the U.S.  Beer was made here as far back as 993 at Breznov Monastery in Prague.  Brewing was done primarily in monasteries, since the Czech Republic was under a 250 year ban on nonmonastic brewing, ultimately lifted in 1250.

The first beer brewed here was known a bile pivo or “white beer”.  Incidentally, beer is also called pivo in Russia.  According to Beer Prague:

The brewing technique used a top-fermenting yeast, producing a cloudy wheat beer. Stare pivo, or “old beer” was brewed with a bottom-fermenting yeast; these beers were brewed at low temperatures for longer amounts of time, producing some of the first lagers. It’s believed that lagering originated in Bohemia, and the practice passed on to Bavaria and beyond during the second half of the 15th century.
Czech breweries were destroyed during wars and various conflicts over the years. But the Czech tradition of brewing beer carried forth focusing on top fermenting beers, made mostly from wheat.  The nineteenth century brought back bottom fermented beers from Germany.  The Czechs fell in love with these beers, and began making their own dark beers.

The origin of pilsner beer here can be traced to 1842 in the city of Pilsen, though the ingredients are different than what is used today.  Hops have been grown here since the 12th century.  Most towns have at least one brewery, though breweries began consolidating in the 20th century.  And wheat beers disappeared.  About 97% of the beer made here is pilsner, light and bottom fermented.

But with the onset of communism in 1948, many breweries closed.  Those who survived made just two beers, pale or dark lager.  The dirty pinkos limited the Czechs to these two types of beer for the next 40 years!!  But on the plus side, this forced the breweries to preserve old fashioned techniques for brewing and malting, which disappeared in other parts of Europe.

But the mighty rise of capitalism also help reintroduce smaller pubs and breweries.  Fortunately for us, these breweries began to experiment with brewing techniques, flavors, and even renewing wheat beer production.  Now, more than 250 breweries (20 in Prague alone) maintain the long history of beer production despite the setbacks and restraints.  They now produce some of the world’s best beer, leaving us to understand why the Czechs are the number one consumer of beer per capita in the world.

Some other tidbits of information follow.  Beer is best consumed at a temperature between 7 to 10 degrees C., achievable by the 7th step down the cellar.  Always use a beer coaster, and place it down before the server brings your beer.  And it is well known that beer is cheaper than water here!

When you toast, say “na zdraví,” which roughly means “to your health” in English. Be sure to make eye contact with each person as you touch glasses (rumor has it 7 years of bad sex will afflict anyone who doesn’t), and if toasting in a larger group it is bad form to cross arms with anyone else at the table. Lastly, when ordering beer at the bar, use your thumb to represent “1” beer, your thumb and forefinger for “2,” and so forth.

No problem, as soon as we sat down, the waiters says two beers?  Were we that obvious??? 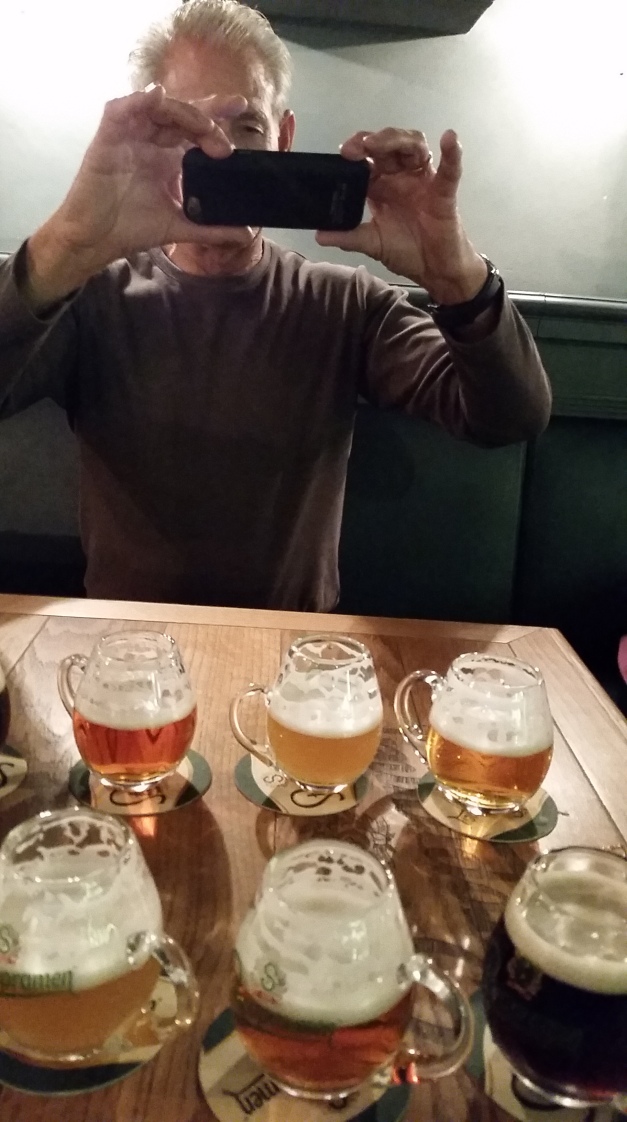