Posted by golfkat on October 21, 2017
Posted in: Cultures, Travel. Leave a comment

Franz Kafka was born in Prague, now Czech Republic on July 3, 1883.  He died on June 3, 1924 near Vienna, Austria.  He was born into a prosperous Jewish middle class family.  He was drawn to his maternal ancestors because of their spirituality, intellectual distinction, piety, and delicate physical and mental disposition.  He became the oldest child after the death of his two older brothers.  Ottla, the youngest of his three sisters, became closest to him.

Kafka was overshadowed by a tyrannical, successful, but overbearing father, who worshipped financial success and social advancement as a shopkeeper. He attempts an autobiography (Letter to Father) in 1919 in a letter that never reaches the addressee.  He blames his father for his failure to marry and enter fatherhood, as well as his escape into literature. He felt his will was broken by his father, as evidenced by his 1913 book, The Judgment.

His anxiety and despair go well beyond his father and family (The Trial, and The Castle), though he chose to live close to them. Kafka’s despair lies in a sense of ultimate isolation from true communion with all human beings—the friends he cherished, the women he loved, the job he detested, the society he lived in—and with God, or, as he put it, with true indestructible Being.

But Kafka did become friendly with some German Jewish intellectuals and literati in Prague.  In 1902, he met Max Brod, a minor literary artist, who later became his agent, literary executor, promoter and savior.  They became acquainted while Kafka went to the University of Prague to study law, where he received his doctorate in 1906.

Contrary to his early life and his writing, he was an ambitious and tireless worker, and liked by all who worked with him.  He was known to be charming, intelligent, and humorous, but found office work both exhausting and routine.  It forced him into a double life, where his nights were spent writing.  His deeper personal relationships were also neurotically disturbed.  This internal conflict was expressed in his sexual relationships, with three failed engagements to two different women.

His office work exhausted him, and he was later diagnosed with tuberculosis in 1917.  He spent periods of time in sanitariums, and finally retired with a pension in 1922.  He moved to Berlin in 1923, to write, and later met a socialite, Dora Diamont, with whom he lived until 1924.  After a brief return to Prague with Dora, he died in a clinic near Berlin.

These are his notable works (few were published during his lifetime):

Just another interesting story about Prague.

Now, just so you don’t ever think Dr. Kafka was a boring writer, check this out:

And this email would not be complete with a definition of an often used word, one which I first heard in college, at the University of California, Berkeley.  I never heard it in our little country high school in the Valley.  The word is Kafkaesque.  What does it mean?  Characteristic or reminiscent of the oppressive or nightmarish qualities of Kafka’s fictional world. I would add surreal and evil to that description.  Well, please use it in a sentence.  The long wait at the DMV is a Kafkaesque experience.
Understandably, Kafka is rarely quoted by other authors.  He is more noted for his visions and perspective.  His influence has perhaps been strongest on more recent authors like Jean-Paul Sartre.  His Der Process was ranked the second most influential German novel of the twentieth century, and that his pervasiveness and enigmatic style has not been emulated.  He wrote in a aloof manner with many legal and scientific terms.  M. Bossy writes: “His characters are trapped, confused, full of guilt, frustrated, and lacking understanding of their surreal world. Much of the post-Kafka fiction, especially science fiction, follow the themes and precepts of Kafka’s universe.”
I would be interested to know what you think about Kafka.  I am going to visit him tomorrow morning. 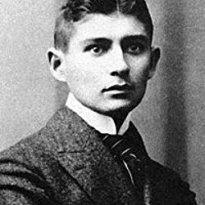 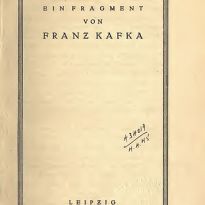