Posted by golfkat on November 2, 2017
Posted in: Cultures, Food, Travel. Leave a comment

This is my Halloween email.  Happy Halloween, as long as you don’t make pumpkin soup.  See why!

It seems eastern Europeans love pumpkin soup, as it was offered in numerous countries on my recent trip.  My travel buddy, Mike, dislikes pumpkin, and I will eat only pumpkin pie.  So, as we approach Halloween and Thanksgiving, what is the big deal with pumpkins?  I figured it was just another dreadful European soup, with the exception of their excellent tomato soup, and to a lesser extent, Hungarian goulash.

The pumpkin is cultivated from squash and native to North America.  Its seeds were found in 7000 to 5500 BC down in Mexico.  It is used as both a food, and a decoration.  Pumpkin pie is a North American thing, it appears.

But pumpkins are big money, as over 1.5 billion pounds are produced each year.  California is a big producer, along with Illinois, Pennsylvania, Indiana, and Ohio.  For you entomologists, and botanists, pumpkins produce both a male and female flower, requiring bees for fertilization.  The world’s heaviest pumpkin was grown in Belgium, in 2016, at a weight of 2,624 pounds!  Half Moon Bay, CA has one of the largest pumpkin festivals in the world.

For most of us Boomers, the pumpkin is a familiar part of our lore, with Charlie Brown’s Great Pumpkin in the comic strip, Peanuts.  And Cinderella’s fairy godmother transforms a pumpkin into her luxurious carriage so she could get to the ball.  The jack-o-lantern’s origin was meant to ward off demons.

Please do not dress your dog or cat into a pumpkin costume!

Pumpkin carving is actually really hard and time-consuming – not to mention dangerous.Even if you manage to not accidentally slice a finger off, you’re still in for the treat of a rotten pumpkin stinking up your home for days to come.

And what is the big deal about pumpkin spiced drinks and foods?  Please don’t adulterate my coffee, tea, or coffee cake!

I also once had the world’s worst dessert, at an famous, upscale Chinese restaurant in the Bay Area.  They served a pumpkin soup dessert!!!  I thought I would gag in front of people I hardly knew!!!  Pumpkin pie would have been a big improvement.  I say stick to pumpkin pie at Thanksgiving, and some OUTDOOR pumpkin décor at Halloween! 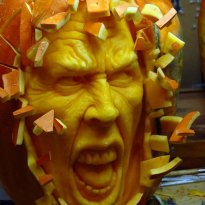