The chances of dying in a road crash in Africa are 26.6 out of 100,000—the highest in the world. Next on the list are Eastern Mediterranean and Western Pacific countries, with respective fatality rates of 19.9 and 17.3.

Avoid these two countries:  For every 100,000 people in Libya , there are an estimated 73.4 road traffic deaths. The next most dangerous country was Liberia, with a death rate of 33.7.  And I thought South Africa, home of Barry the V was dangerous?

Someone dies on the road every 25 seconds, or 1.2 million people per year!  The World Health Organization is hoping to reduce this number by half by 2020.

Compare that to bicycle riding deaths.  The most recent data is from 2015 (the most recent), 818 cyclists died on U.S. roads, an increase of 12.2% from the previous year.  The average age of the cyclist death was 45.  Included are 70% in urban settings, 61% were not at intersections, and 3% were in bike lanes.  Half of the fatalities were during daylight hours.  Disturbingly, 27% of cyclists killed were drinking alcohol.

Helmet use has been estimated to reduce the odds of head injury by 50 percent, and the odds of head, face, or neck injury by 33 percent.  I just hate too see anyone riding a bicycle without a helmet.  Eighty-six percent of bicyclist deaths are persons ages 20 and older. During the past few years, no more than 17 percent of fatally injured bicyclists were wearing helmets.

A total of 720 bicyclists were killed in crashes with motor vehicles in 2014, a 4 percent decrease from 2013.  Clearly, a flat tire is not the cyclists only issue, as the automobile or truck is the main predator.  Florida leads the way with 5.7 cycling deaths per one million residents.  They are followed by Louisiana (3.8), New Mexico (3.1) and Arizona (3.0).  California has the most deaths, with average annual death of 113.

Contrast this to motorcycle deaths, which have averaged over 4,000 annually since 2004.  Operators of sport motorcycle models had a higher rate of death compared to other motorcycle types, and speeding was noted in roughly half of fatal sport and super sport accidents compared to about a fifth for fatal accidents of other types.  Helmets do not seem to be required in Europe, cycles or bicycles.

Nearly half of all deadly accidents involve only the motorcycle (so-called single-vehicle accidents) and a major issue is the loss of control during a bend in the road. There is a reported 80% chance of injury or death on a motorcycle in the event of an accident, compared to about 20% for passenger vehicles.  In raw numbers, almost 5,000 motorcyclists died in crashes in 2015. 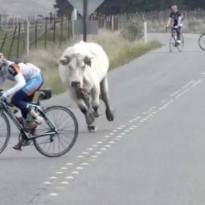