North on the Coast Starlight (Amtrak)

Having taken a portion of the Coast Starlight from Seattle to the Bay Area, I decided to try starting in San Diego, and ending in Seattle.  I flew down to San Diego to catch the Pacific Surfliner to Los Angeles Union Station.  It leaves at the ungodly hour of 6am.  But at least I got to spend the better part of a day in San Diego.

At Union Station, we board the Coast Starlight at 10:10am.  The scheduled time of arrival in Seattle is Thursday evening at 8:12pm at the King Street Amtrak Station.  From there, I will spend a night in Seattle, along with most of Friday before heading home on a dinner hour flight back to Fresno.

Here is Amtrak’s description of the Coast Starlight:  A Grand West Coast Train Adventure, en route daily between Los Angeles and Seattle, the Coast Starlight train passes through Santa Barbara, the San Francisco Bay Area, Sacramento and Portland. Widely regarded as one of the most spectacular of all train routes, the Coast Starlight links the greatest cities on the West Coast. The scenery along the Coast Starlight route is unsurpassed. The dramatic snow-covered peaks of the Cascade Range and Mount Shasta, lush forests, fertile valleys and long stretches of Pacific Ocean shoreline provide a stunning backdrop for your journey.

John Steinbeck said, “The Pacific is my home ocean.  I know its moods, its color, its nature.”  Hardly do I pretend to know the Pacific Ocean as well as Steinbeck or Jacques Cousteau.  But I have often gazed out to the ocean from a beach house in Aptos (from a previous life).  And I have often played by its sandy and sunny shores in Hawaii.  And I have flown over just about every corner of the Pacific Ocean, from Alaska and Russia to the north, to New Zealand and Ushuaia, Argentina to the south.

The dining car:  Most long-distance trains include a full-service Dining Car, which serves hot meals prepared onboard by trained chefs for breakfast, lunch and dinner. All meals for First Class passengers, passengers with sleeping accommodations, and all Auto Train passengers (no matter which class you’re traveling) are included in the price of their train ticket. Coach Class passengers may dine for an additional charge.  The food is, at best, average, since they do not really cook on board, but merely heat or microwave already prepared foods.  But it is considerably better than what I encountered on the Trans Siberian Railway across Russia.

Passengers are asked to make reservations for lunch and dinner. Reservations are taken in 15-minute increments for a more pleasant dining experience, assuring passengers of receiving quality service from Amtrak staff and preventing the Dining Cars from becoming overcrowded during peak meal times.  I don’t really think this is the case, but you must abide by these rules.

Herein lies the beauty of the dining car.  Passengers are seated AS they present themselves.  I never know who I will be dining with until we sit down!!!  I have met some incredible people, and I have met some who care not to say a word.  The lovely couple I met on my last Amtrak trip out to Denver were great.  We went to two Giants-Rockies game together, and joined in some microbrew tasting after each game.

We may not have internet connection on the train (we did!).  And my phone only works about 2/3 of the time.  Some Amtrak stations have free wifi.  My GPS works well, as if I need to know where I am!  More stories of the iron rail highway tomorrow! 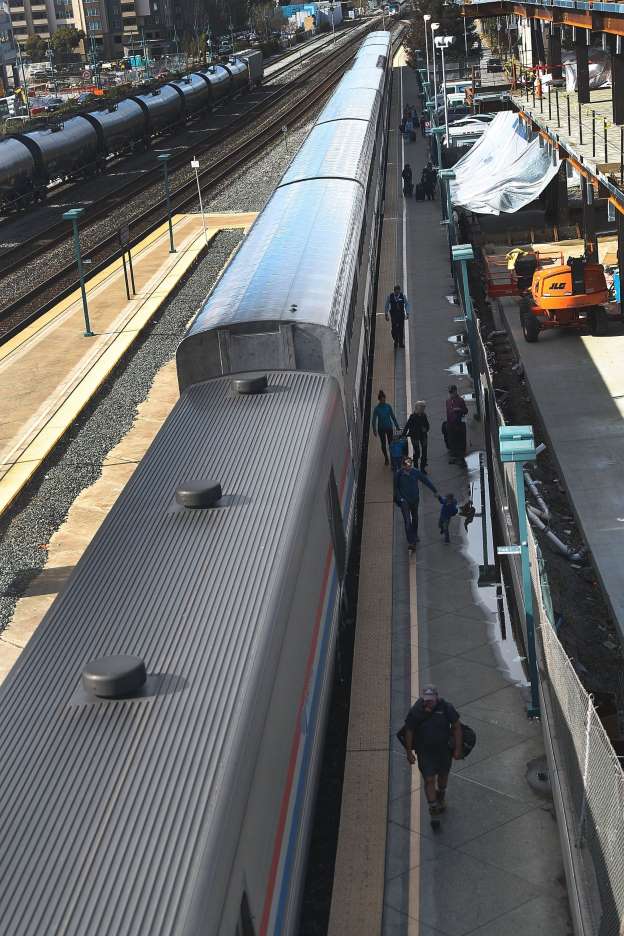