Sometimes plane travel really stinks.
A flight from Dubai to Amsterdam had to make an emergency landing in Vienna after a fight broke out because one of the passengers wouldn’t stop breaking wind.

The fart-induced fracas happened Feb. 11 aboard Transavia Airlines Flight HV6902 when two men sitting next to an apparently very flatulent man raised a stink about his repeated gas attacks, according to Fox News.

When the alleged perpetrator didn’t stop, his disgusted seatmates reportedly complained to the airline crew, who apparently did nothing.
Instead, the captain issued a warning to the two complainants, accusing them of noisy and aggressive behavior and making threats, according to the NL Times.

When the freedom-from-flatulence fighters wouldn’t stop griping about their fellow passenger, a fight broke out on the plane, according to the Dutch language newspaper De Telegraaf.
The pilots then made an emergency stop in Vienna and removed the complainants, but apparently not the farting man. Two women sitting in the same row as the angry men were also forced off the plane as well.

All four people reportedly shared Dutch and Moroccan ancestry, but the two women claim they were simply sitting in the same row as the men involved with the incident.
The women are now taking the Dutch budget airline to court, according to the Metro.

Now, rewind back about 15 years ago, on our first trip to Costa Rica. I assume we were on United Airlines, and sitting in First Class on the return flight from San Jose, Costa Rica to San Francisco. We were in the second row, behind a middle aged woman of Latin origin. No sooner do we get airborne, and the gas starts flying.

I start by fanning the area with the airline safety card. The flight attendant is amused, but does nothing. When the gas attack continues, I start fanning more forcefully. I look around at the other passengers sitting close by. They have covered themselves with the airline’s blanket, and are laughing uncontrollably underneath!!

What to do? Move back to coach, or hit the emergency button so the oxygen masks deploy? I was getting ready to barf!

We are only 20 to 30 minutes into this flight. Mercifully, the seat belt light is turned off, and the middle aged lady, a term which I use loosely, heads to the potty. Thankfully, upon her return, it seems that the cabin has returned to some normalcy. But every time I look at my fellow passengers, they start laughing uncontrollably, again!!!

That was the end of the incident, but perhaps I should have asked for some type of refund or credit on the flight. On what grounds? Air sickness due to flatulence? It was an amusing and stinky experience. 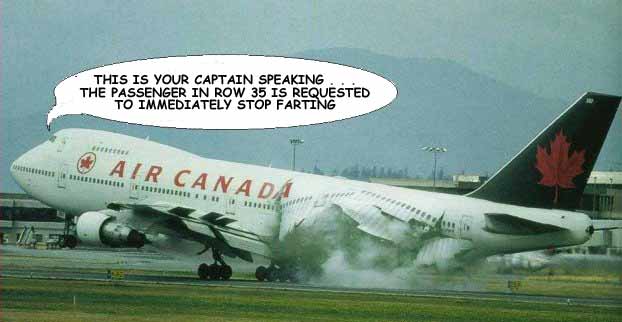