Posted by golfkat on April 7, 2018
Posted in: Action, Cultures, Travel. Leave a comment

When it comes to crossing international borders, I tend to err on the side of caution.  I have heard too many stories of corruption at “unofficial” border crossings.  Rule One:  Always, I repeat, always get your passport stamped when you enter or leave a country.  Did I say ALWAYS!!!

Most of you know I crossed a rather notorious border back in 1971, from West Berlin to East Berlin.  I would consider that one of the most unique, and dangerous border crossings of my life.  The East Germans pointed a machine gun at me when I crossed.   I also told you that I went across on foot with an American hippie couple.  She was rather attractive, so of course, they strip-searched her!!!

We flew over the world’s tallest international border.  That would be none other than Mount Everest, which between Nepal and the Tibet Autonomous Region (part of China).  The border sits at over 29,000 feet above sea level.  We flew to Everest on a local Nepalese airline, called Buddha Air.  Turns out they have many fatal crashes!

Another interesting “border” crossing is located between St. Taffy’s Basilica (aka St. Peter’s) and Vatican City.  It might be the quirkiest border in the world.  You must enter Vatican City, a city state surrounded by Rome, to access the Sistine Chapel and other Vatican museums.  With the throngs of people coming through, it was too difficult to get a passport stamp. And the Pope was having a “viewing” that day to top it all!

Rumor has it that only one place on earth is a true quadripoint, a place where four countries meet at a single point.  This would be the intersection of Botswana, Zambia, Zimbabwe, and Namibia.  And Mr. Mike and I were there on our African safari venture back in 2012.  And though we spent two weeks in South Africa, we did not venture near Lesotho, a kingdom completely circled by South Africa, and our friend Barry the V.

The reason I said always is for good reason.  A dear friend went over the border from northern Thailand to Burma, before they changed the name back to Myanmar.  It was a strict and harsh military dictatorship.  They crossed the border at a small river by local ferry and were told upon landing on the Burma side that they could pay and get their passport stamped on the way out.  When they returned, the “guard” at the gate was gone, the local ferry was nowhere to be seen, and the military police were descending.  They were jailed until they came up with $1000 cash to buy their way out!!! 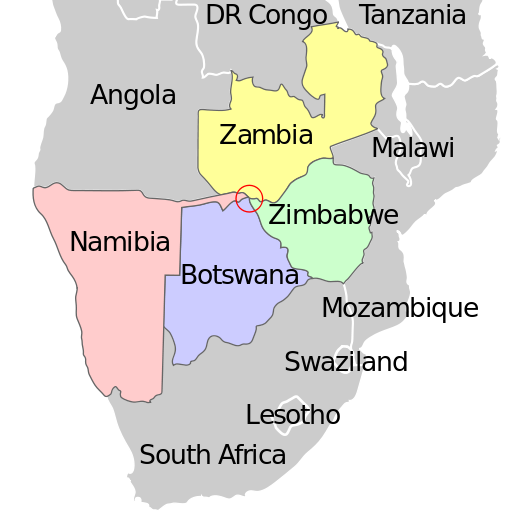