Posted by golfkat on May 5, 2018
Posted in: Action, Cultures, Food, Sports, Travel. Leave a comment

Many of you know I was stuck in Lodi one summer, back in 1968.  I went to summer school, worked, and played baseball for the local Lodi nine.  I never knew much about the town, except for some of the players who grew up there.  I also knew they produced huge amounts of wine, mostly on the less expensive side, the type that us college students could afford.

Then along came the Fogarty’s, and Credence Clearwater Revival.  Yes!!! I was stuck in Lodi that summer, but had a great time.

Now after almost 50 years, things have changed.  I am now a cyclist, no more baseball.  And Lodi’s grapes are producing some award winning wines.  We plan to do both, cycle, and taste wine today, with a designated driver, of course.  We have cycled Monterey and Napa, spending most of our time dodging the traffic while riding on narrow bike lanes.  Lodi says they are different, and better.

From the SF Chronicle:  But Lodi is different. Its roads are empty and flat. Their shoulders are broader than a linebacker’s. When you park your bike at a winery, the person who owns the place often turns out to be the person pouring the samples. Most Lodi vintners are too busy selling their wines to visitors to sell their wineries to conglomerates.

Start at the Lodi Wine and Visitor Center on Turner Road, where the friendly folks behind the counter are giving away seven varieties of genuine Lodi dirt.

Downtown, a cyclist passes beneath the historic Lodi arch and all the Lodi taverns that the fellow in the famous 1969 Credence Clearwater Revival song said that, oh Lord, he was stuck in again. That tune, a municipally beloved cheap shot, is still the biggest thing ever to hit Lodi (John Fogerty, the fellow who wrote it, said he never visited Lodi but that the name of the town sounded like a place someone would get trapped). Keep pedaling, because none of the taverns, understandably, is laying claim to being the fateful, dead-end tavern.

On Woodbridge Road, the Heritage Oak Winery is a great place to stop. It’s got picnic tables, a restroom that you don’t have to ask the key for, a cute black puppy that chases a blue ball if you throw it, and a grid of trails for hiking and bird-watching. It’s also got 23 wines to try. This is a problem, said owner Tom Hoffman, because the $10 fee only entitles you to pick seven of them. But if you buy a bottle of wine, you get your $10 back. Plus, visitors may help themselves to free oranges and figs from the vineyard orange and fig trees. 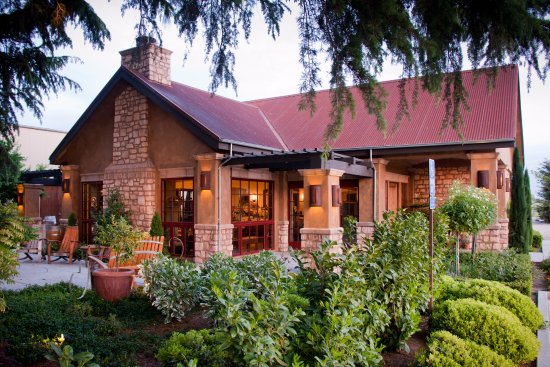 We stopped at Michael David Winery for lunch and found a great wine.  It is an Inkblot Cabernet franc, a little pricey at $35 a bottles, but what the heck!

After you get hungry from lugging around all the free dirt, stop at the Lodi Airport Cafe to have lunch and watch the rookie skydivers at the airfield next door. The restaurant, decorated with antique airplane parts, is well known for its home-baked focaccia. Waitress Ashlie Baker says you better not have it before you go skydiving.

It is a short 25 mile loop, with several wineries and a cafe’ to enjoy.  I have a designated driver, the best way to taste and ride.  So, for today, I do not mind being “Stuck in Lodi, again.”