It finally appears that I am taking a long awaited trans Canadian rail trip.  The rail portion of this trip begins in Toronto, and ends three nights later in Vancouver, BC.  I flew yesterday to Toronto from home to start the trip slightly late.  Sixteen hours, to be accurate.  Yes, originally 10 pm last night, but now 230pm Wednesday. On the back end in Vancouver, I will get there at 2am, stay the night, then fly back home on Sunday.

VIA Rail Canada was established in 1977.  The basic route we are taking is Toronto, Winnipeg, Saskatoon, Edmonton, Jasper, Kamloops, and finally, Vancouver.  The distance is 4466 kilometers (2775 miles), 4 nights, and 3 days.  I shall be housed in a “Sleeper Plus” berth for one person.  Meals are included.  There is a bon voyage champagne toast in the domed Park Car, at the back of the train.

We will leave Toronto’s Union Station at 230pm this afternoon.  It is Canada’s busiest train station.  This train has some pretty long stops.  For instance:  40 minutes in Hornpayne, 30 minutes at Sioux Lookout, 3 hours and 45 minutes in Winnipeg, 25 minutes in Sask 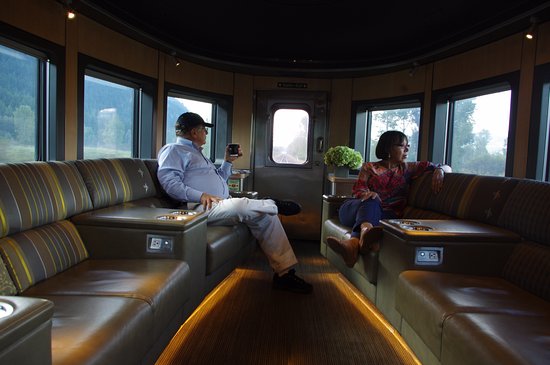 There are other stops, mostly unfamiliar names to me.  Some are:  Capreol (Ontario), Hornepayne (Ontario), and Sioux Lookout (Ontario).  Each has a stop of 30 minutes.  After these, the stops are the “BIG” ones like Winnipeg (Manitoba), Saskatoon (Saskatchewan), Edmonton (Alberta), Jasper (Alberta), and Kamloops (British Columbia).

The VIA brochure calls it “Canada’s Best Window, Discover the people and places that make this country unique.”   The opening page says:

Imagine an adventure that begins the moment you board the train. Leave the city centre behind and glide past gentle prairie fields, rugged lake country and picturesque towns  to the snowy peaks of the majestic Rockies. The Canadian® brings you the landscapes  as you’d never see any other way—with ease, comfort and exceptional service.  A feeling that remains long after the journey’s end.
Needless to say, I am not as familiar with Canada or the Canadian Rockies.  I have been to Montreal, Toronto, Vancouver (many times), Lake Okanagan, and Waterton Lakes National Park in Alberta.  Originally, I had planned to cycle some of the route, but the expense did not justify the cycle/rail journey.  So, we will just take this trip as it comes, and I will let you know what I see, and what I like.
One way to save money on travel just happened on this trip.  VIA had a good offer for a trip from Toronto to Vancouver.  I used United mileage for a “free” flight from Fresno to Toronto, and another on Alaska Air for the Vancouver to Fresno return flight.  I will have lots of time on board to rest and nap.  I figured the savings on flights and hotels on both ends totaled about $1000.  Another benefit of graduating with honors from the Samurai School of Discount Travel!!!!
Some websites inform VIA Canadian travelers on how to pack for this trip.  The list includes:  your favorite Perry Como cardigan sweater, slip on shoes (I bring beach slippers), a camera, books, earplugs for sleep, comfy pants (I bring yoga pants), antacids, hand lotion (and hand cleaner), small bag (for valuables), and sunglasses.

Truth be known, I have added a hotel in Vancouver, once I learned that the VIA Canadian often arrives up to 9 hours late, at least 16 for us  So, rather than stress about getting to the airport for my flight home, I will stay the night, enjoy Vancouver, have some great seafood, walk around, and relax!!!